So generally, Sunday seems to be a time when my roommate and I look at each other and say "I really want to cook something new."

With a fridge full of veggies that had nearly overstayed their welcome, I started a search for a recipe that would encompass most of the varied cast of characters. I struck out with a somewhat lame look through my cookbook collection, but the Food Network came to my rescue. 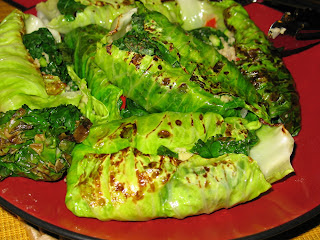 I've never watched Cat Cora on TV. I think I might have glimpsed her for about 5 seconds on a morning talkshow once. Nevertheless, I wanted to dislike her. Don't ask me why; I guess I'm just petty. But I gave her "Vegetable Couscous 'En Crepinette'" a shot, and, with some variations, it actually turned out pretty well. 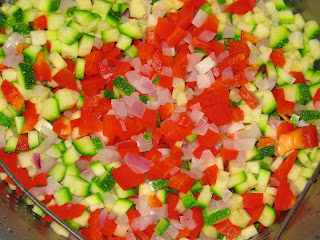 Our edits to the recipe:
- I'm not sure why you turn on the oven at the beginning...
- Veggie filling was comprised of zucchini, red pepper, red onion and (uncooked) scallions.
- The couscous was cooked in 1 1/2 cups of water - a compromise between the recipe and the back of the couscous box. I think 2 cups would have been way too much.
- No herbs - we had none.
- Rice wine vinegar instead of red wine vinegar - again, that's what we had on hand.

The assembly took a little while to get the hang of, but I'm wicked smaht, so I caught on. 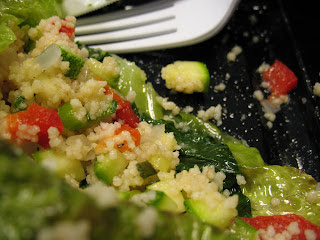 Now, the recipe called for searing the little packets before serving. I'm not sure if this step is necessary. I ate the leftovers today and, fearing the stench of hot cabbage spreading throughout the office via microwave, opted to eat them cold... and they were better. Although, using plastic cutlery did prove to be a challenge with the cabbage leaves.

As I assembled the packets, my roommate was trying to decide what needed to go with them. The bowl of extra scallions winked up at him from the counter, and neither one of us could shake the idea of scallion pancakes from our heads. I didn't follow what he put in them... all I know is that they were tasty! Since they were fried in very little oil, they didn't puff up much. As they cooled, the dough compressed; it seemed a lot like naan to me after a while. Looking at this picture now is making me hungry... 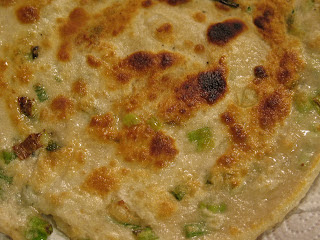 All the more reason for you to move back to Boston!

I didn't bear witness to the dough-making part of this, but I did partake in the rolling. It's so much fun! I've been craving these things for a while...