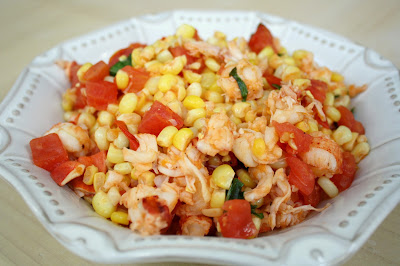 Melt the butter in a large skillet. Add corn and tomatoes and cook, stirring occasionally, until the tomatoes begin to burst. Add lobster and basil and cook until lobster is warmed through. Salt and pepper to taste.
Posted by Pam at 5:24 PM 1 comment: 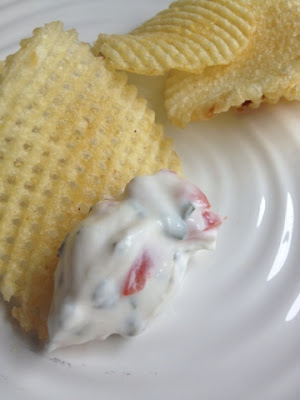 And so we've reached that point in the summer where we are required by Mother Nature to eat tomatoes with everything. This is not a complaint, not by a long shot. Tomatoes are one of the few things I could eat by themselves daily while they're in season (and then not touch again for another 10 months). But variety is still a good thing.

While this dip is not a true Caprese (missing the mozzarella cheese), the Greek yogurt that actually turns it into a dip gives it enough dairy creaminess that the missing cheese should be excused. Once the tomatoes and basil are in there, you'll hardly be missing the cheese.

I used a mixture of fresh and dried basil because I didn't have enough fresh to give the dip the right amount of flavor. Feel free to use all fresh or all dried, but I quite liked the combination of using both.

Mix ingredients together, then salt and pepper to taste. Allow to chill in the fridge for at least 1 hour before serving.
Posted by Pam at 5:26 PM No comments: 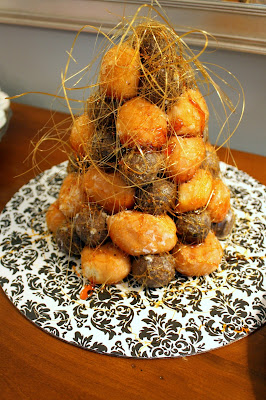 I have been enamored by the idea of the Croquembouche for a while - a tower of cream puffs under a net of spun caramel threads. I've wanted to make one, especially after I mostly mastered caramel a year or so ago. But what situation called for a cream puff tower? It seemed a little extreme for most of the occasions in my life.

However, when my friend Ann told me that she was hosting the wedding shower for our friend April and mentioned the idea of a Croquembouche, I jumped at the chance to make one. April is a huge Dunkin' Donuts fan, but she lives in LA, where there are no DD franchises. When she visits Boston, the are always multiple boxes of donut holes around. By simply replacing the cream puffs in a Croquembouche with donut holes, we'd have an impressive-looking dessert that the bride would adore.

I was surprised at just how easy this was to make! Granted, I had taken out a lot of the work by buying donut holes rather than making my own cream puffs, but even the structure was not that difficult to put together. Plus, playing with the sugar to get the netting around the tower was just plain fun.

Note: I used a cardboard cake round as the base, like something you would get from a bakery. Since you're basically gluing down the donuts with caramel, I would suggest using one of these, since cleaning a real plate later will be a total bear.

In a medium saucepan, heat sugar and water over medium-high heat. Do not stir! Swirl the pan gently if you feel you must stir. The sugar will dissolve, melt, and begin to turn golden. Reduce heat as it begins to turn color. Watch the caramel carefully as it darkens - too dark and it will taste very burnt. Don't forget it will continue to cook a bit after you take it off the heat!

Working one by one, dip one side of a donut hole in the caramel, then place it caramel-side down on the serving plate. Continue this, placing them in a circle around the plate. Begin stacking them into a tower, caramel-side down. If the donut holes are strangely shaped and won't stay on their own, spoon some caramel into any gaps and hold them down as the caramel hardens.

Once all the donut holes have been placed, dip a spoon into the caramel (which will have cooled a good deal by now). As you lift the spoon out of the pan, a thin strand of caramel will harden - you can actually tug on the string to make it longer and thinner. Gently work these strands around the tower as you pull them off the spoon. They will harden quickly, so place them quickly, but you'll have plenty of caramel, so don't worry about it if you don't get a strand in place before it hardens. Continue until you have a sparkly net over the whole tower.
Posted by Pam at 4:45 PM 4 comments: