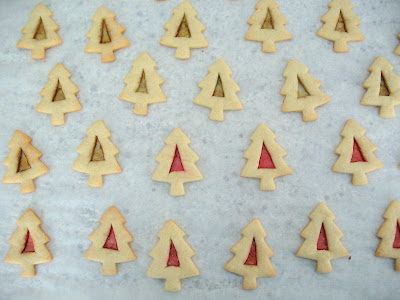 Merry Christmas! I've been spending the past week baking more cookies that I thought we could eat (although they've been slowly disappearing, so I may be wrong with my assessment). I had hoped to post some cookie recipes before Christmas, but the time got away from me. There will definitely be recipes before the new year, though!
Posted by Pam at 11:00 AM 2 comments:

Bagel Action Figures, and other amazing things from Finagle a Bagel

I've been a fan of Finagle a Bagel since I took a small class on bagels at their now-defunct Coolidge Corner shop a year or so ago. Someone from their headquarters in Newton showed us how to make bagel dough, then they took us into the back of the shop to boil, top, and bake our own half dozen. I tried their chunky vegetable bagel that day and totally fell in love.

But I'm loving Finagle even more now. They've released a bunch of webisodes, available on their website and on YouTube, featuring five guys in the baking plant. They all made me laugh, but Action Figures and Schmears were by far the funniest. Watch the first two below, then watch the rest at the Finagle a Bagel website.

Blogging By Mail: Indulge Me 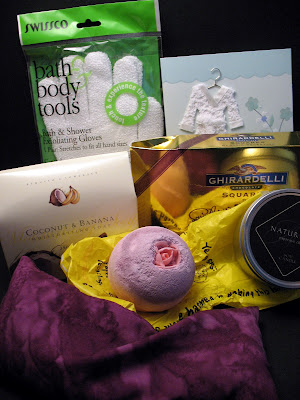 It's been over a year since the last Blogging By Mail, hosted by the wonderful Stephanie at Dispensing Happiness. This time around, the theme was "Indulge Me" - at such a hectic time of year, this is the perfect way to pamper yourself a little bit.

Amidst my haze of the flu (Captain Trips, as I've taken to calling it), a small box arrived for me. I quickly opened the box, and for such a small package, it was jam packed with goodies. Arlene from the Food of Love put together a wonderful assortment of goodies to keep me comfy and cozy this winter. Her card, with a fun spa theme, kicked it all off, and the spa theme continued with an espresso chai candle, a rose bath bomb from Lush, banana coconut soap (it smells like a tropical drink!), a soothing eye pillow, scrubby bath gloves, and of course, some chocolate to enjoy in the bath. I think I'm going to wait for our next snow storm to take advantage of all of this (well, maybe not the chocolate...).

Arlene's site has tons of delicious recipes, including lots of comfort foods and a whole slew of recipes with Weight Watchers points (which I'm sure I'll be paying attention to come January). Check it out!
Posted by Pam at 10:46 PM 3 comments: 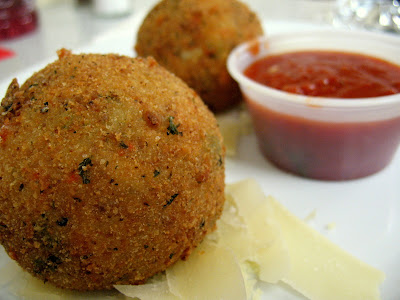 Sometimes a restaurant's decor can be misleading. We've all been to places that seem fancy but serve up mediocre food. In the case of Pizzeria Dante in Coolidge Corner, the exact opposite is true - it may look like any other brightly lit pizzeria, but the food choices prove that there's more going on in the kitchen.

Dante's pizza is built on basics: a chewy dough with just enough crunch on the bottom, a tomatoey tomato sauce, and plenty of cheese that's not too greasy. Unusual toppings only add to the fantastic basics. The Rabe pizza is topped with bitter broccoli rabe, sweet Italian sausage, and roasted red peppers. The LA pizza is covered in thin slices of potato, bacon, and scallions (although why it's named LA is beyond us). And the Bianco features black olives, breaded eggplant slices, and some of the creamiest, sweetest ricotta we've had.

Pizzeria Dante also offers other tasty Italian dishes. This Bostonist really loved their arancini, homemade rice balls mixed with peas, shredded carrots, ground beef, and plenty of mozzarella cheese. For $5, the serving of arancini was huge and filling and sated our need for warm comfort food. To end your meal, try a scoop of gelato, piled high in little tubs next to the register, just like in Italy (or the North End).

Pizzeria Dante is located at 1398 Beacon Street in Brookline. They are open Monday through Saturday, 11:30am to 10pm, and Sunday, noon to 9pm.

The Only Cure for Swine Flu... is Bacon

Aaaand I'm back! I've spent the past week or so holed up in my room, going through about 12 trees-worth of Puffs tissues (with lotion, of course, which is why I still have a nose), a million gallons of tea (I think I've reduced our tea supply by half, which is saying something), 6 two-liters of diet 7-UP and about 3 liters of Trader Joe's knockoff Smart Water, four and a half seasons of Supernatural, and a complete project for my mother's birthday. The swine flu was not pleasant, and I'll probably have this cough until April, when the weather finally clears up, but I made it through alive! And what better way to celebrate than with some bacon? 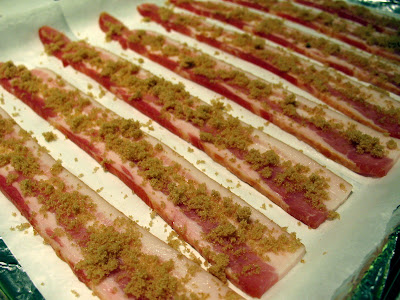 I originally made this candied bacon back in August, when my brother brought me a pound of bacon after watching Paula Deen make candied bacon with maple syrup. I nixed the syrup in favor of brown sugar and ended up with an easy and delicious treat. The bacon by itself is pretty hardcore - sweet and salty, crunchy and chewy, and pretty much just amazing. But you really can't eat much of it, and I found myself left with a ton of the stuff. I ended up chopping it up and adding it to my chocolate chip cookie recipe (just replace the cherries with the chopped candied bacon) for just a hint of salt and smoke.

You could, of course, also serve it as a garnish to your bacon vodka.

Note: When baking my bacon, I lined my rimmed baking sheet with tin foil and then topped with parchment paper. This may seem excessive, but it helped contain the mess and was worth it when it came to clean up. 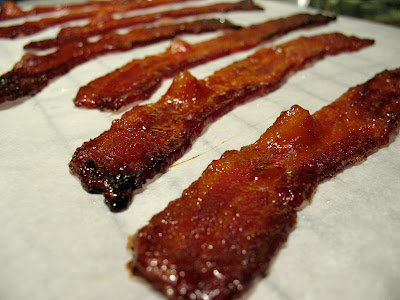 Preheat oven to 350°. Line a rimmed baking sheet with tin foil, then with parchment paper. Arrange bacon slices on parchment so that they are not touching. Sprinkle brown sugar on the top of each slice. Bake for 10-12 minutes, then flip the bacon over and sprinkle on a little more brown sugar. Bake for another 10-15 minutes, until the bacon is crispy and has a deep brown, lacquered look. Cool bacon on a parchment-lined cooling rack and try to keep your hands off it while it cools.
Posted by Pam at 11:29 AM 5 comments: