My brother IM'd me yesterday, saying my parents had been trying to reach me all day. I called them right away, thinking something had happened. No, they had read on here that I had a cold and wanted to make sure I was still alive. I assured them that my magic chicken soup had brought me back from the dead and that they didn't need to worry. They were getting ready to head down the Cape for the 4th of July, so they met me in Brookline for some dinner.

My father picked Zaftig's in Coolidge Corner right away - give the man a menu that says "Breakfast All Day" and he's in heaven. He ordered the Banana-stuffed French Toast, as recommended by the waitress. He must have liked it, because it had vanished before I had even finished half of my sandwich. 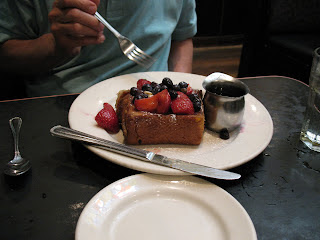 There were a lot of good things on the menu, and I was tempted to be my father's daughter and go for breakfast - chocolate French toast, specifically - but the chicken Caesar roll-up sounded really good too. So I did what I usually do... wait until the waitress looks at me, then let my mouth make the decision of what words it wants to say. Tonight, my mouth chose "Caesar," so I ran with it.

Overall, this was an excellent sandwich. The dressing was tangy, with a pronounced lemony zip, and there was a ton of good grated Parm. What I didn't like - this is going to sound strange and is probably the only time in the history of restaurant critiques that this has ever been said - there was way too much chicken! It was like the lettuce was just there for show, peaking out of the roll-up's cut edge. When I pretend I'm being healthy by ordering a salad in sandwich form, I want there to be some semblance to salad. 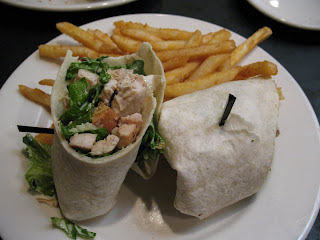 I'm tempted to go back for Brunch sometime, but I really don't like having to wait a long time for breakfast. Especially when they serve breakfast all day...


Note: My mother emailed me this morning with a link she thought would interest me. She mentioned that she was surprised I hadn't written anything about Zaftig's yet. What do you think I am, Mom, a blogging machine?

If you want Zaftig's breakfast in the morning without the wait, it's a lovely way to start the weekday when you play hooky from work.

Nothing damns the man like having a champagne split and potato pancakes at 10:30 a.m. on a Tuesday.

Actually Pam...I DO think you're a blogging machine ;-)