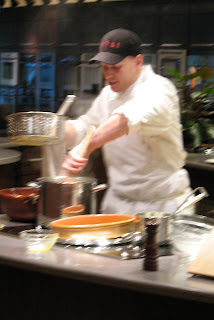 My parents have been doing some major shopping for new kitchen appliances. One great thing about shopping for appliances at a place nicer than Sears is that they know how to treat you well. Last night, my parents (and by extension, me) were invited to the Thermador showroom in Canton for a cooking demonstration. The guest chef for the night was Paul Turano, of Tryst in Arlington and Spitfire in Canton.

Paul was hilarious and spent the 2+ hours joking with the small audience. His approach to the cooking was very loose and had a lot of improv aspects to it, something he was trying to impress on the stuck-in-a-rut home cooks in attendance. As he said, "you can't be intimidated by [cooking]. If I can do it, anyone can do it." 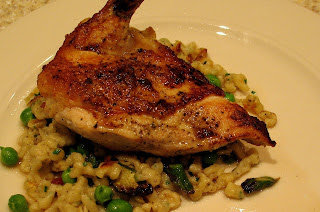 The meal was simple but delicious, and proved that you can eat gourmet at home with not much effort. We started with asparagus soup with truffle whipped cream. I was too anxious to try it, so no picture. It was more a pea-asparagus soup, and the two veggies balanced each other out; it was not too woody from all asparagus.

The entree was roasted chicken with herbed spaetzel. Paul didn't focus on the chicken, but spent his time with the spaetzel. He claimed it only takes him 5 minutes to make, but he was talking so much that it took much longer. It was fun to watch him push the dough through a colander directly into the boiling water to form the pasta. I've never realized how easy this is to make, but I will definitely be giving it a try. 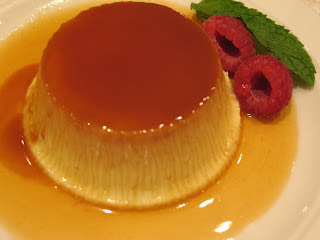 Dessert was a beautiful creme caramel, equally as easy and delicious as the other courses. Again, Paul got so into the conversation with the crowd that he burned his first batch of caramel. Now, I've made similar custards before, but I was much happier with the density of this creme caramel - it had substance and oomph to go along with incredible flavor.

I had a great time, and I appreciated the chance to hear a chef talk about his everyday experiences running his own restaurants. Hopefully, my parents will take a long time to make their decisions, and we'll get the chance to enjoy some more nights like this.
Posted by Pam at 9:40 PM

Dude I love spaetzel... Make me some!

I will, because it's insanely simple! You have to make the trip up here, though ;)