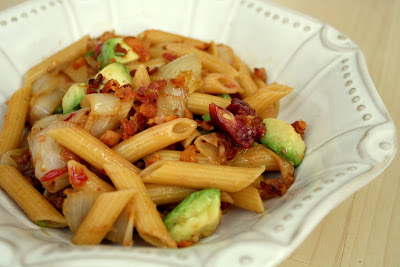 I had so much fun creating a recipe for December's Kitchen Play event that I thought I should try my hand at a recipe from this month's gathering, sponsored by California Endive. Frankly, I don't know if I've ever had endive before, but this seemed like as good a reason as any, so I jumped right in.

Wicked Good Dinner's recipe for citrus-braised endive (the amuse bouche entry on Kitchen Play) immediately intrigued me, and I thought it was perfect for this time of year. As I read through the recipe, though, I thought that the flavors would make a great pasta sauce as well, so I changed the recipe around to become a whole meal.

I'm so happy with how this dish turned out. The flavor combination is unique and unexpected but so harmonious. The final dish is sweet and salty, bitter and unctuous, soft and crispy - there are just so many good things going on! This dish serves 2, but could easily be doubled.

Whisk together the honey, garlic, grapefruit zest and juice, ginger, and vinegar and set aside.

In a medium pot, bring salted water to a boil and add endive. Cook for 4 minutes, then remove from pot and cool slightly; chop into 1/2-inch pieces (I discarded some of the tips of the outer leaves that had turned brown while boiling). Set aside. Discard water (it will be bitter) and refill pot. Bring water to a boil for pasta.

In a large skillet, cook bacon over medium-high until crispy. Remove bacon pieces and drain on a paper towel. Add pasta to boiling water and cook according to package. Add olive oil to the remaining bacon fat in the pan, then add endive and spread it across the bottom of the pan. Allow to cook 3 minutes or so until it begins to caramelize, then toss the whole mixture and allow to caramelize on the other side for another 3 minutes or so. Remove endive from pan. Add honey mixture to the pan and bring to a boil, whisking up all the little bits from the bottom of the pan. Reduce heat and cook 3 minutes, until reduced. Add endive, bacon, orange wedges, avocado, and cooked pasta and toss to coat (you can add a few tablespoons of the pasta water to create a little more sauce). Salt and pepper to taste.
Posted by Pam at 8:56 AM 1 comment: 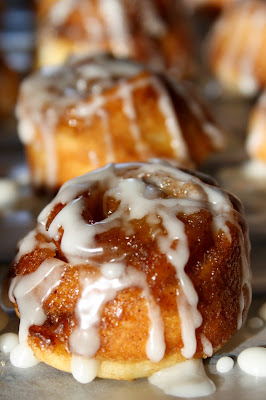 Every January for the past few years, I spend a weekend at my friend Ann's house while her husband goes skiing in Vermont. Inevitably, the weekend turns into an all-you-can-bake affair, and I'm pretty sure Ann's favorite part is when I wake up before she does and bake something out-of-the-ordinary for breakfast. This year's treat? Mini cinnamon buns, as found on Can You Stay For Dinner?

I had been planning on making cinnamon buns for our extravagant breakfast, but all the recipes I was finding (including the one in the new Flour Bakery cookbook

, which I ended up making other delicious things out of) involved yeast and many hours of rising time. So when I Stumbled (a great way to find food blogs, by the way) across this ready-in-half-an-hour recipe, I knew I had hit paydirt.

My buns didn't come out quite as pretty because I used a mini muffin pan, and the cups were the size of the sliced rolls, which didn't allow room for them to spread out. However, I think I prefer how mine looked - since they couldn't spread to the sides, they spread up, into little conical shapes, which made them look a little more substantial than they were.

Combine flour, baking powder, and salt in a large bowl. Stir in the cream and mix until the dough just pulls together and is soft and moist.

On a lightly floured surface, roll out the dough until you have a roughly 12x7 rectangle. Smear softened butter all over the surface of the dough, then sprinkle the brown sugar/cinnamon mixture evenly over the butter. Starting at one of the 12-inch sides, roll the dough up into a tight spiral.

Use a sharp knife to cut the roll into 24 small spirals. Place each spiral into a cup in the prepared baking pan. Bake about 12-15 minutes, until the buns are lightly golden. Cool on a wire rack.

While the buns are cooling, whisk together the powdered sugar, vanilla, and a splash of milk until smooth. Add a little bit of milk at a time until the glaze is just slightly runny (you don't want it too watery, so go slow!) Drizzle the glaze over the buns before serving.
Posted by Pam at 3:34 PM 2 comments:

Starting the Year Off Right 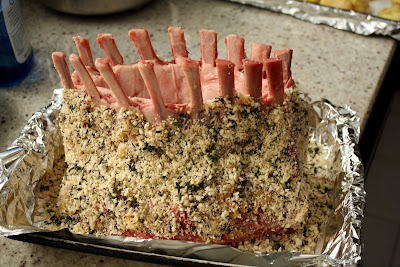 One of the best Christmas presents I received this year came completely out of the blue. I have somehow managed to get myself into the good graces of the American Lamb Board, and just before Christmas, a huge packaged showed up on my doorstep. Inside, safely wrapped in a duffel-sized cooler bag, was a beautiful crown roast of lamb - something I've heard of, but I don't think I had ever seen in person. My parents immediately claimed it for our family New Year's Day dinner, and it was packed into the freezer to await its date with the oven.

On the big day, I decided to go with the recipe that had been sent along with the meat (well, mostly - we left out the roasted veggies that the recipe places in the center of the roast). It involved two whole heads of garlic, panko breadcrumbs, and fresh rosemary and thyme. I absolutely loved how it turned out, and I would probably make this coating for other cuts of lamb as well. The only problem I had was that it had to cook much longer than the recipe said, mostly, I think, because I never managed to get the lamb into a circular shape, leaving not enough room in the middle for the hot air to circulate. 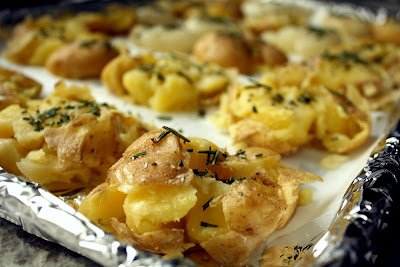 Of course, I wanted a side dish that was equally spectacular to go with such a great piece of meat. I turned to an idea that I had been wanting to try for ages - smashed potatoes. If you search for a recipe with that name, though, more often than not you'll end up with a recipe for mashed potatoes. Not the same thing at all. Instead, I cobbled together a few ideas to end up with what are, to me, the ideal potatoes. I would eat these every day, no joke. They're crispy on the outside and creamy on the inside, and topped with plenty of salt (rosemary is optional, but I think it helps). I even tried the same technique with little cipollini onions, and although they didn't crisp up, the flavor was a hit - sweet and unctuous. In fact, the softness of the onions served as a nice contrast to the crispiness of the potatoes. (You can see the onions on the tray better in this picture.) 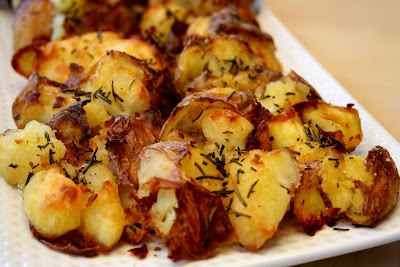 Cut 1/2 inch off the tops of the garlic. Place in small metal pan and drizzle with 1 tablespoon oil. Roast in 375°F oven for 1 hour. Cool and squeeze soft garlic cloves into small bowl. Mash with remaining 1 tablespoon oil; set aside.

In small skillet, melt butter and add bread crumbs. Stir and cook until browned. Pour into bowl and mix in herbs. Place roast in roasting pan. Rub garlic mixture over outside of roast. Generously season lamb with salt and pepper. Pat on bread crumb mixture. Roast at 375°F for about 45 minutes or until desired degree of doneness. Remove roast from oven, cover and let stand for 10 minutes. Carve and serve 2 to 3 chops per serving.

Smashed Potatoes (or, the only potato recipe you'll need from here on out)
*This also works well with cipollini onions - just cook in the same way as the potatoes.*
small potatoes (1 to 1 1/2 inches in diameter)
olive oil
kosher salt
chopped rosemary (optional)

Place potatoes in a small pot and cover with water (at least 1 inch over the potatoes). Add a good pinch of salt and bring water to a boil. Reduce to a simmer and cook until you can pierce a potato with a fork but there's still a little resistance (too soft and the next step won't go too well). Drain potatoes and let cool slightly.

Preheat oven to 450°. Line a baking sheet with parchment paper. Drizzle olive oil across the whole baking sheet. Place a potato on the sheet and slowly flatten it with the bottom of a ramekin or a large flat-bottomed glass; repeat with the rest of the potatoes. Drizzle more olive oil on top and sprinkle with salt and rosemary. Roast for 30-40 minutes or until desired crispiness is achieved.

Full Disclosure note: The lamb was sent to me for free by the American Lamb Board.
Posted by Pam at 11:00 AM 7 comments: