How do you say "twice-baked" in Armenian? 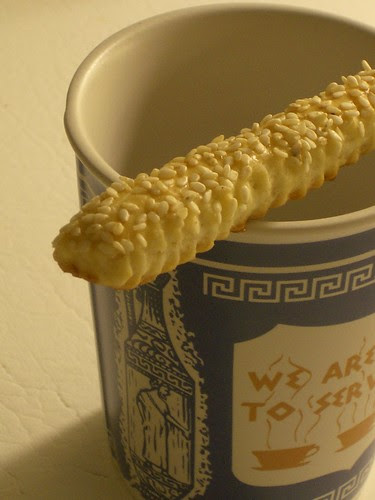 Armenian simit is crunchy and flaky and much-lusted after in my family. I usually make a double batch and put most of it in the freezer before anyone has a chance to devour it all. And it always ends up on any cookie tray I put together.

When people ask what they are, I invariably tell them "Armenian biscotti." I mean, they're basically the same: dry and crunchy, twice-baked, and just begging to be dunked. The differences, though, are that they are formed before they're baked (as opposed to the biscotti loaf that is then sliced and baked again) and they're not as sweet. The nutty sesame seeds offer a nice textural difference with the cookie’s interior, but don’t overpower the simple elegance of the dough.

I have to admit, the second half of this batch didn't turn out the way I wanted. I rolled it out, then got distracted by my boys' record-setting inning, allowing the butter to soften too much and causing the dough to stick to the wax paper. Not as bad as the time I added baking soda instead of baking powder, though! 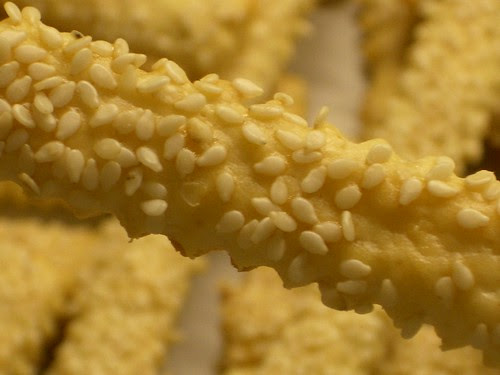 In a large bowl, mix all the dry ingredients, then cut in the butter until well incorporated. Add egg and milk and mix with a fork until the dough forms large clumps. The dough will be sticky.

Divide dough in half and place one half on a sheet of wax paper. Flatten dough with the heel of your hand until it holds together. Fold the dough over itself 4 or 5 times, flattening between each fold, to form layers. Dust with a little flour if the dough is too sticky, but don't over-flour. Form dough into a 1-inch thick rectangle and wrap in wax paper. Repeat with second half. Chill several hours or overnight.

Working with one piece of dough at a time, loosen the dough from the wax paper and flour the paper. (Working on the wax paper saves a lot of clean up time.) Roll the dough until it is a 1/4-inch-thick rectangle (roughly 12x10). Keep flouring and lifting the dough off the paper to make sure it doesn't stick; as the dough warms, it will become very sticky again. Using a fluted pastry wheel, cut off the rough edges, then cut the dough into 5x1/2 inch strips. Brush with beaten egg and sprinkle generously with sesame seeds.

Transfer each strip gently to a parchment-lined baking sheet. Bake at 350 degrees for 15 to 20 minutes, until the cookies are a very pale gold. When all the cookies are baked, turn off the oven and place all the strips on one baking sheet, stacking to allow air to flow around them. Place the baking tray in the warm oven for an hour.
Posted by Pam at 9:42 PM No comments:

This will be a food blog as soon as I can get my act together. Stay tuned... early May should see some posts of some sort!
Posted by Pam at 10:13 AM No comments: