I've walked by Grafton Street Pub about a million times, but there always seemed to be another restaurant ahead of it on my list. For some reason, the stars aligned last night, and I finally made it in... and man, am I happy I did. 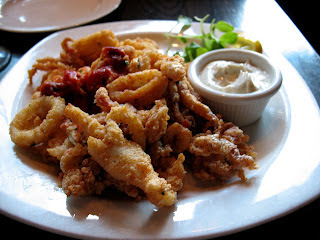 We started with drinks and calamari while we waited for the rest of our party. This calamari was fantastic - very light and tender, not rubbery at all. It was accompanied by a zesty peppercorn dipping sauce, which added a lot more than the typical marinara or garlic aioli could. 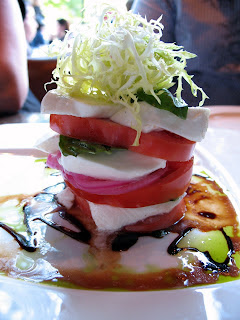 Once we had our whole group, we ordered more drinks and the tomato and mozzarella appetizer to split. This was ok, but not great. It's obviously too early for really good tomatoes, so that part was a bit of a loss. The cheese tasted a little too much like regular mozzarella; it didn't have the smoothness, in both taste and texture, of a typical fresh mozzarella. The real winning part of the dish was the pickled red onions. I love red onions, but I don't like that I can still taste them hours later... I didn't get that at all with these. Pickling the onions made them very mild, and they were great alongside the so-so cheese and tomatoes. 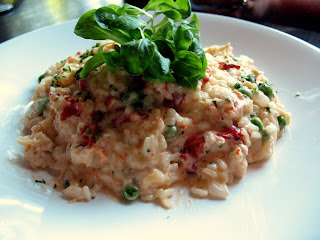 Our entrees were back on the same level as our calamari appetizer. The seafood was masterfully handled - sea scallops were perfectly cooked, and the lobster risotto had powerful lobster flavor in every bite. 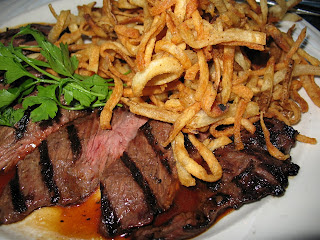 The steak frites were also very tasty. The cut of meat was a little fattier than I like, but I'm rather picky about that kind of thing. I do think the dish needed more sauce; the fries were ultra-crispy and benefit from being softened slightly by what sauce I could spare.

Overall, I would definitely head back to Grafton Street some time soon. The portions were large, the food expertly cooked, and prices reasonable.

We were haunting around Harvard Square yesterday!

I made your cucumber salad for a dinner party a few weeks ago and it was a big hit!!!