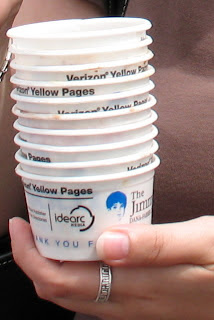 Today was the last day of Scooperbowl 2007, a fundraiser to benefit the Jimmy Fund. When the Scooperbowl started 25 years ago, there were only 4 vendors serving to about 1000 people. The participating creameries were smaller and more local, something that I think the event is sorely lacking today (How about Kimball's? Or Toscanini's? Christina's? Herrell's? Anyone? Anyone? Bueller?)

Basically, for $7, you get all the ice cream you can eat, doled out in roughly 1/4 cup servings. You only get one spoon, though, so if you throw that away, you're screwed.

I managed 10 samples which was fewer than many people out on the plaza, but more than my coworkers (I think they averaged 7 or 8). Yes, I was double-fisting it, just to try the flavors. I didn't finish all my cups, though... some of them were a little too gross.

My hits and misses:

Cinnamon Buns from Ben & Jerry's - Awesome! It was like Chocolate Chip Cookie Dough, minus the chocolate, plus a ton of cinnamon. Good stuff, and the dough was nice and chewy.

Baseball Nut from Baskin-Robbins - Gross. It was vanilla ice cream with swirls of raspberry jam and peanuts. Blech.

Oreo from Baskin-Robbins - Pretty decent. I like larger chunks of cookie (Emack & Bolio's, JP Licks and Ben & Jerry's have spoiled me), but this had a good cookie flavor.

Dulce de Leche from Breyers - Too sweet and airy. Who can eat this stuff? Ice cream needs some heft, it shouldn't feel like a marshmallow is dissolving in my mouth.

Dice-Kream from Brigham's - Meh. It's just Curse Reversed (or going way back now) Reverse the Curse, repackaged for the current wunderkind.

Shock-A-Cone from Coldstone Creamery - Yum! I hate Coldstone, but this was great. It tasted like the perfect bite of a Drumstick cone.

Founder's Favorite from Coldstone Creamery - Meh. This had something to do with chocolate and pecans, but it was too sweety and sticky for me.

Lobster Tracks from Garelick Farms - Blah. It's Moose Tracks under a different name, but the caramel cups are covered in red chocolate instead of brown. This flavor has gotten a little boring because almost every shop offers their variation of it now.

Mint Chip from Haagen-Dazs - Good, but not great. I was surprised that this was the only mint offering of the day, but I was happy that I had it last to cleanse the palate. The mint was too subdued, though. I would much rather have Brigham's Mint Chip or Ben & Jerry's Mint Oreo.

Did anyone else go? What were your hits and misses?
Posted by Pam at 6:07 PM