Since I'm always looking for new holiday cookies and since my baking list is always ridiculously long, I like to find recipes that are simple or require very little time to make. When I came across this recipe for Lumps of Coal, I was in love - not only was it a quick no-bake recipe, but I could use Peppermint Joe-Joes from Trader Joe's to make them truly Christmas-y!

(And sorry for no picture, but really, they're just blackish cubes.)

Line an 8x8 baking dish with parchment paper and set aside.

In a food processor, pulse cookies until ground. My food processor is smaller, so I did this in batches. Make sure to fish out any pieces that don't get chopped up well and add them back to the processor for more time.

In a medium pot over medium heat, melt butter, then stir in marshmallows until melted. Stir in ground cookies, then press into prepared baking dish, making sure to get the mixture into all the corners. Let set at room temperature (I waited an hour or so), then cut into pieces.

I cut mine very tiny, because A) I was making a huge cookie tray and wanted people to get little bites of everything, and B) these things are RICH!. Considering how easy these are to make, I'm fairly sure that they will be going on my Christmas cookie list for years to come. :)
Posted by Pam at 11:37 AM No comments: What would Christmas be without some strangely thematic food?!? This year, I became totally enamored with these veggie tray Christmas trees on Pinterest, and I knew I'd have to make one happen. I made my mother volunteer for the veggie tray for our family gathering, and my father and I spent the morning before the party having fun with toothpicks and fresh produce.

I combined a number of similar ideas from Pinterest to make this tree. I should have taken a photo of the base before we started adding veggies - we used a cabbage on the bottom, an apple in the middle, and a carrot on top. Both the cabbage and the apple had the ends trimmed so they sat flat, one on top of the other, and the carrot was a nice handhold to stabilize the tree as we added the veggies. We cut about half of the carrot off at the end because it was too hard to stab the toothpicks into it.

After the base was complete, we added big pieces of broccoli and cauliflower to make up the bulk of the tree. Grape tomatoes, peppers, and cucumbers made up the decorations, and baby carrots and more cucumbers were placed around the bottom of the tree like presents. We added some bits of kale here and there to fill in any holes, and the kale really gave the tree a full look. The star on top is a yellow pepper that I cut with a cookie cutter.

The tree was a huge hit at the party, although I noticed that people kept taking veggies from the back of the tree because they didn't want to ruin how it looked. I started purposefully taking my pieces from the front so others would start as well.

The best part of the day, though, was after dessert when my cousin's son came up to me and said "I want that apple!", pointing at the tree. I took apart what was left and gave him the apple. A little while later, I came back, and he was basically using the leftover parts of the tree as legos, building little men with the veggies and toothpicks, then eating each piece. I told my cousin that all snack times from here on out should involve toothpicks. :) 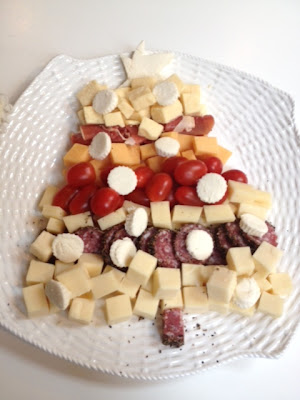 My cousin Emily is also on Pinterest, and leading up to Christmas, she had repinned the veggie tree AND this cool cheese tray tree. I told her what I was making, and I knew her mother had gotten some cheese, so she should make this one. This was a big hit too, and such a simple but beautiful way to present cheeses and meats!
Posted by Pam at 11:19 AM 2 comments:

Labels: cheese, holiday, party, Pin It Do It, vegetables 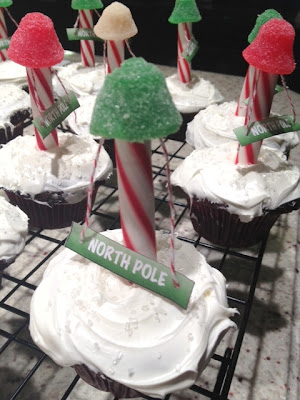 When I started my new job at the library, I was informed that during our quarterly Friends of the Library book sale, there was also a cupcake sale. I couldn't possibly not participate. I'm not usually a cupcake baker (cookies are really more my thing), but I was willing to join in.

And thankfully, my Pinterest obsession came in handy once again! I had pinned these adorable north pole cupcakes, which I thought would be perfect for the bake sale. The original pin used striped paper straws for the pole, but I wanted to make them as edible as possible, so I opted for peppermint sticks topped with bell-shaped gum drops. The sign and string, however, couldn't be edible, but that's close enough.

Labels: cupcake, Pin It Do It 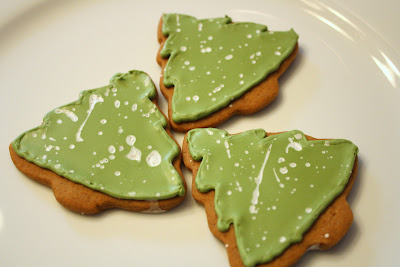 Christmas cookies are a BIG thing for me. I bake a ridiculous number of cookies this time of year, and I usually end up bringing 10 or so different kinds to family functions. I try to keep a good balance between the classics (gingerbread), the things I know my family loves (rosemary shortbread), and experiments. I also end up making a few presents as well, like black cake for my dad (although my mom usually gives a few away too) or various flavored liqueurs.

My list so far (although this will be whittled down at some point):
-Gingerbread
-Rosemary Shortbread
-Chocolate Peppermint Cookies
-Almond Macaroons (for my gluten-free peeps) (or maybe peanut butter cookies?)
-Baraze
-Buckeyes (how have I not written about these before?)
-some kind of biscotti

And I know it's still early for baking, but usually by this time, I have all my recipes in order and I've stocked up on necessities like butter, sugar, and flour. I'm falling behind this year!! That's where you come in - give me your favorite cookie recipes! I'm always looking for more, and I'm happy to give some new things a shot.
Posted by Pam at 11:13 AM 3 comments:

Well, I did it. I wrote 30 blog posts in November (can't say it was truly daily, since I did back-date a few). Would I do it again? I think so. Much like NaNoWriMo, NaBloPoMo's focus is just to get you writing, not to write the BEST content for your blog. And considering it's been months since I posted ANYTHING, this is better than how it was before. I don't think I really learned anything about blogging, but I had fun.

The thing I liked best was linking my other blogs to this one. When I first started Making Islands and The Reading Mouse, I was a little better known here for food writing, so I didn't want to muddy the waters by talking about other stuff. I'm a little less hesitant to do that now, though. I'm thinking I'll do a monthly round-up of my posts on the other two blogs over here, just to keep it from being too overwhelming.
Posted by Pam at 10:13 PM 1 comment: