La Spina ("the thorn") is a new Italian restaurant in Davis Square, Somerville, nestled behind the Rosebud Diner (right where a thorn should be). We arrived at 8 on a Saturday night to find the place almost empty... not the best impression. The food, however, was fantastic. Everything was fresh... you could actually tell what all the ingredients were. 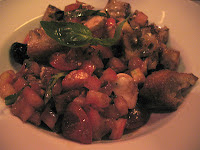 Our waiter was fun and quirky, and as soon as he told us that one of the specials was panzanella, I jumped on it. I first had panzanella in the little town of Murlo in Italy, and I've been hooked ever since. It's a great way to use leftover bread in a fresh salad. This version was very tasty, but I was a little disappointed in the variety of the ingredients - tomatoes, basil, and olives. I like to make panzanella a little more salad-like, with cucumbers and red onion. There was also a little too much dressing, leaving the fresh tomatoes overwhelmed by too much oil and vinegar. 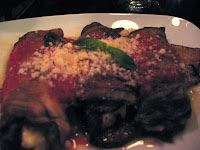 I wasn't terribly hungry, so I went for a second appetizer for my meal. I had heard that the eggplant involtini was even better than that of another nearby Italian restaurant, Sagra, so I had to give it a try. I liked this version very much, as it was less oily than Sagra's. The ricotta filling was more dense, but smooth, and was just slightly sweet. The eggplant was soft and broke apart easily under my fork. I would definitely order this again.