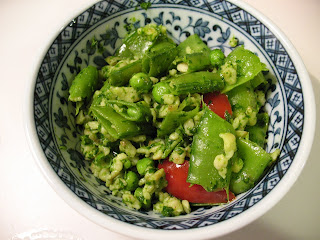 The sun is out again here in Boston, and pesto sounded like a great idea... but basic basil pesto seemed a little too pedestrian for today. What better green to use than my favorite, arugula?

I was working off the cuff on this one, but I think it turned out pretty well. I also tried to cut down on the oil, so it's a little more pasty than a typical pesto.

Arugula, about 4 oz. or half a bag
Olive oil, about 1/3 cup
2 garlic cloves
Zest of half a lemon
Shaved Pecorino Romano, to taste

Combine ingredients in a food processor and pulse until blended. Add more of whichever ingredient seems lacking, especially oil if it's too dry or not moving around the blade. This made about 3/4 cup. Obviously, you can adjust the amounts to produce more.

I was very happy with this combination. Arugula, olive oil and Pecorino are naturals together. The lemon added a very sharp, fresh taste that intrigued me; it gave the whole recipe a different twist. (Ouch. No pun intended.) 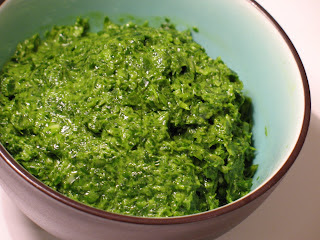 Now, I needed something to put the pesto on. I really wanted fresh pasta, but I don't know where to buy it near me, and I didn't have the patience to make any tonight. Instead, I decided to try my hand at the spaetzle recipe I received a few weeks ago from Paul Turano.

Mix all ingredients except flour together. Add flour once everything else is incorporated. Over a pot of heavily salted, boiling water, push spaetzle dough through the holes of a colander. Work in batches. As soon as the spaetzle float, transfer to cold water to halt the cooking.

I really wanted to take pictures of the spaetzle-making process, but I had to work so quickly, and the potential for bodily injury was growing by the second, so I had to pass. Instead, you get this amazing photo of my naked spaetzle. 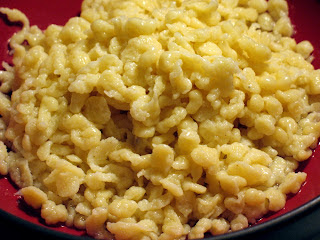 I could never imagine the need for a spaetzle maker before. Now I understand. The holes in my colander were just too small, making it almost impossible to get the dough through. The pieces that did make their way through were tiny... almost a joke. And the way they were swimming around in the water was a little obscene... The steam was pouring up through the colander holes that weren't plugged up by dough, and I had to resort to awkwardly holding kitchen towels over my arm in order to keep all my skin intact.

But I soldiered on. After all the spaetzle was cooking, I heated some oil in a pan and sauteed some chopped peapods. Then I added the spaetzle and allowed the dumplings to brown slightly, tossing occasionally.

After cooking, I added a few chopped tomato pieces and a big spoonful of the arugula pesto (about 1/4 of what I had made). I had intended to keep some leftovers for lunch tomorrow, but the small amount of spaetzle didn't stretch as far as I thought it would. 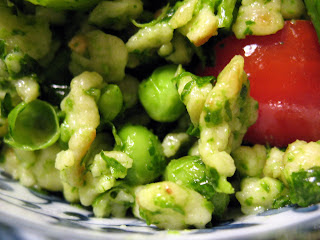 Overall, this wasn't a total disaster. I mean, yes, the spaetzle was more difficult than I expected. So what if I almost scalded my hand off making it? And so what if said spaetzle looked like giant sperm? At least the pesto was great, and at least it still tasted good!
Posted by Pam at 8:34 PM

Eww Pam.... eww... I was sold on eating the product of your battle until the end there...

I wish I had a picture of them in the pot... it was gross!

Being Slovak/Hungarian, I call these haluski. You totally don't need a spaetzle maker- put the dough on a plate, and with a butter knife, slide chunks of the dough into the boiling water. This lets you make bigger haluskis (spaetzle), which I like, and also makes a terrific racket from the knife hitting the plate over and over. awesome. Great pictures by the way, I can't wait to try making the pesto.

K, is your dough thicker? Mine was kind of sticky - not something I could see coming off the edge of a butter knife without a stuggle.

I think I would have been fine if my colander didn't have such tiny holes...

It might be less sticky, but not by a lot, it's quite sticky. Plus, your finished product looks very similar to mine. It helps to dip the knife in the water every few times, the water will keep the dough from sticking.

Came across your blog via Tastespotting. Am very excited with your pesto and veggie combination with spaetzle! Here it's combined with meat and I think of it as a heavy, cold-weather dish, but yours looks fantastic for spring/summer.

Also wanted to say: you don't need a spaetzle maker. The traditional way to do it is to pour the dough/batter onto a wooden cutting board. You then scrape it so it drips off the edge of the board into the water... voila.

I prefer to use a grater with large holes. Something like this. though ours is one of those cheap plastic ones you get at the grocery store. I pour the batter onto the wrong side, and use a spatula to press it through. It's less messy than a board, and makes it easier to take a break.

Just found your site by some randomness, and so far so good....

This entry though, made me actually laugh out loud. Oh, you should have had the room mate shoot a video of the cook pot! I think i would have fallen off the seat from laughing so hard!