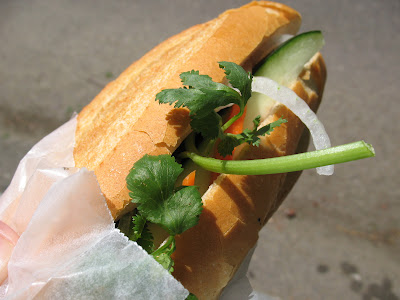 It's hard to pay $7-8 dollars for a sandwich when one of the best sandwiches around costs a mere $3. 163 Vietnamese Sandwiches in Chinatown offers fresh, warm, filling, and delicious banh mi sandwiches on the cheap.

Clearly, 163 Vietnamese Sandwiches is used to serving a wide array of hungry people. They whip out those sandwiches in about a minute, prepared to order. Pay attention to the sign at the counter that lists all the ingredients - if there's something you don't like, they'll be happy to leave it off. Choose from tofu, chicken, beef, or cold cuts, which are then piled high along with cilantro, cucumber, pickled carrots and daikon, spicy peppers, mayo, and fish sauce, all wrapped in a crunchy baguette. But be careful when you're eating - that baguette is delicious but also a mess. With the weather getting nice, you may want to save yourself the vacuuming and eat one of these outside.

Graduation Dinner at No. 9 Park 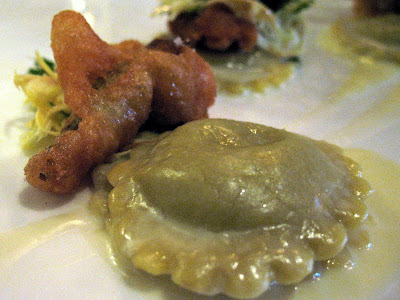 I have been dying to try No. 9 Park for ages - I look in the windows longingly when I walk past and I've checked out their menu online once or twice. So what better way to celebrate the completion of my Master's degree (and the end of this crazy semester that has resulted in severely limited blogging time) than with a meal at No. 9 Park?

From the moment we walked in until the moment we left, the service was impeccable. Our waiter, John, was the perfect level of attentiveness - it was easy to get his attention, he came over to check in on us numerous times without seeming obtrusive, and his descriptions and recommendations were spot on. When I asked where the restroom was to another server who had cleared some plates, she led me across the restaurant instead of just pointing me in the general direction.

As much as we were intrigued by the 7-course Chef's Tasting menu, we opted for the 3-course prix fixe instead. Three seemed like a more reasonable number, although based on how much we all enjoyed our meals, we may have to go back for the tasting menu sometime.

For an appetizer, I opted for the artichoke ravioli, with fontina fonduta, fried artichoke hearts, and a shaved artichoke salad. The mix of textures and cooked/raw ingredients was perfect - each bite was an example of how great an artichoke can be. I had a hard time deciding between the ravioli and the much-lauded prune-stuffed gnocchi with foie gras. I've never liked foie, based on what I've tried before, though. Luckily, I did snag a bite off my brother's plate, and I can no longer say I hate foie - clearly whatever I've eaten before has been subpar and ill-prepared because this was completely different - creamy, with a crispy sear, and unctuous without feeling overly fatty.

The entrees were a tough choice - I could have ordered almost any of them and been happy. I ended up ordering the lamb, served two ways (steak and braised) with cooked vegetables and what they called bagna cauda (but was more like pureed olives with olive oil). I don't think there was a single drop of the bagna cauda left on my plate by the end of the meal - it was as well suited to the perfectly cooked lamb as it was to the less exciting cooked vegetables (although I love that they included fennel in the mix). Again, I snagged a bite of my brother's dish - grilled pork belly with spiced peanuts and a sweet pea puree - and I think his meal was my favorite. The pork belly was creamy and salty, not at all stiff like other pork bellies that I've had before. The peanuts added texture, spice, and more salt. The whole thing was sinfully rich but not overly heavy.

Desserts were an even harder choice. I was undecided until our waiter described almost every single dish in detail - he won me over with a made-to-order hazelnut cake with a black olive caramel and Thai basil ice cream. The cake was small and shaped like a canele. The interior was like a more subtly flavored nutella, and the edges were not overly cooked, which can happen so often with molten chocolate cakes. The olive caramel was salty and sweet, and it was very easy to pinpoint the olive flavor. And Thai basil ice cream? That made me want to bust out the ice cream maker and start experimenting. My mother's dessert came with Szechuan peppercorn ice cream, and that was another one that had me itching to start cooking - it was floral and elegant, with just a little kick of spice at the end.

After this meal, I'm pretty sure that No, 9 Park will be my new special occasion restaurant. I don't think I've ever had a meal like this before - we ooo'd over every single bite, from first to last. 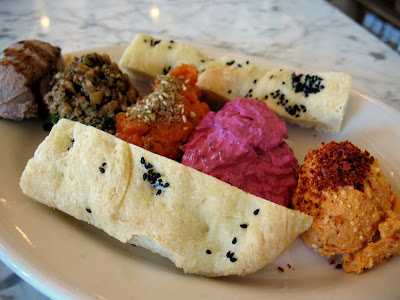 In a quiet spot just off the main road, with a menu that deviates from the typical fare, Sofra Bakery in Cambridge offers a wide variety of tantalizing eastern Mediterranean flavors. With so many choices, you're sure to find something you like.

The shining glory of the bakery is the mezze bar, which takes up a good portion of the area next to the register. Mezze (or often meze) is a spread of appetizers - and this is definitely a spread. Choose one (with crackers) for $3 or five (with bread) for $9. The whipped feta with sweet and hot pepper (a mainstay at Oleana and something you can make at home) is creamy and sweet, with not too much kick. The spicy Moroccan carrot salad is addictive, packed with flavor from harissa, ginger, olive oil and vinegar. Be adventurous - with so many options, you have plenty of room to try something you might normally order. But make sure to order an extra piece of bread - you don't get nearly enough. 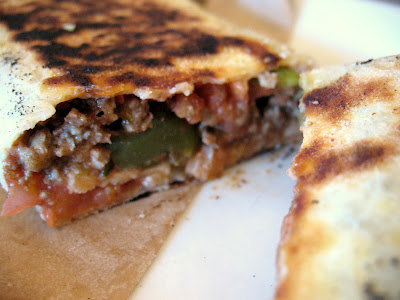 If sandwiches are more your deal, try the stuffed flatbreads. Think of them as a Mediterranean burrito - a griddled flatbread wrapped around inventive and creative fillings, such as eggplant, leeks, and goat cheese, or chick pea, potato, labne, and za'atar. The sausage flatbread, with cumin, orange, olives, and feta is this Bostonist's favorite, packed with ground sausage and more flavor than you'd think the wrapper could handle.

And of course, don't forget that Sofra is a bakery above everything else. A variety of delicious treats are perched next to the register, and it's hard not to order one (or twelve) as you order your meal.

Sofra Bakery is located at 1 Belmont Street in Cambridge. They are open Monday-Friday, 8am-8pm, Saturday 8am-6pm, and Sunday 8am-3pm. It can get really crowded inside, so be prepared to visit at off hours or get your food to go. 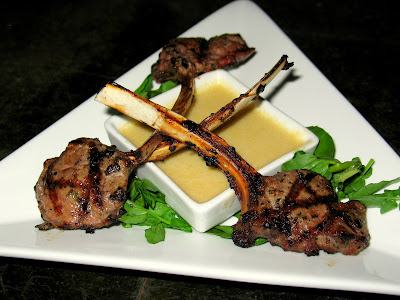 Drinks and snacks at the bar are a great way to unwind at the end of the day, but the food and drinks can add up fast. Many restaurants in Boston take this into account and have developed special bar menus for these economic times. 33 Restaurant & Lounge's $3 Menu is just one delicious example.

33's new menu features a wide range of snacks and heartier dishes. It's easy to cobble together a full meal from these plates for under $10. Pictured above are the grilled lamb chops, three perfectly cooked lollipops with barely any fat on 'em, with a savory cheese fondue. Other 3 for $3 choices include crostini (one each of olive, mushroom and caprese), pita with dips (baba ganoush, hummus and tzatziki), and sliders (which are huge and definitely a great value). Avoid the tomato, basil, and mozzarella stacks - it's not tomato season, so try something else. Other choices on the menu include a standard side or Caesar salad, truffle French fries (crispy, salty, and addicting, and unctuous, filling mac & cheese. 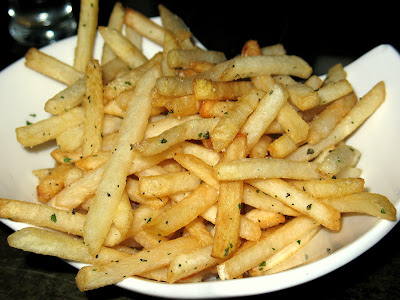 The 3 for $3 menu is available on Wednesday and Thursday from 5pm to 7pm (at the bar and high tops in the back of the room) and Friday and Saturday from 8pm to 11pm (in the lounge). 33 Restaurant & Lounge is at 33 Stanhope Street, right by the Back Bay Station.