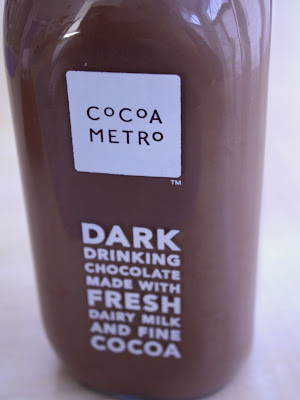 If you can ever find a time to wander around a place like Russo's when it isn't busy (is Russo's ever not busy?!), you'll be rewarded with little gems of products sitting on the shelves. Ann and I took a trip to Russo's last weekend, and the sleek packaging of Cocoa Metro stood out against the other milk options - crisp white lettering on a glass bottle, filled with silky-looking, deep brown chocolate milk.

Surprisingly, when I got home, there was an email in my inbox from the founder of Cocoa Metro, telling me about the product. I told him I already loved the packaging and their tagline (Carpe Cocoa - what, you think I like Latin or something?), and he offered to bring a bottle over for me to try.

I broke the milk out the next morning and gave it a small sip. It's thick and velvety and just sweet enough to balance out the dark chocolate. I'm usually a skim milk girl, so this 2% mix is a little thick for my taste, but it is utterly heavenly. It actually tastes like chocolate, not some weird amalgam of chemicals, with a touch of vanilla to balance it out. Plus, Cocoa Metro uses Callebaut chocolate, some of the best stuff around.

Back to that 2% thing. I knew I could easily have balanced it out with a measure of skim milk to water it down, but I had other things in mind. I poured some milk into a coffee mug, about halfway, then microwaved it until hot. I used my cheapo milk frother to whip it up, but if you don't have one, you can just use a small whisk stuck into the mug and twirled between the palms of your hands. Topped off with regular drip coffee, the Cocoa Metro made a better mocha than what you can get at a coffee shop. And for slightly more than the cost of one mocha at Starbucks, you can get a whole bottle of Cocoa Metro to make mochas at home for a week.

Cocoa Metro is only available in the Boston area: Bread & Chocolate in Newton, Formaggio Kitchen in Cambridge, Russo's in Watertown, and a number of Whole Foods.
Posted by Pam at 11:18 AM

I WANT! ps, this post is on boston.com right now, though I'm sure you know that!

Mmmm...I love Russo's and have never seen this milk. As a milk and chocolate milk lover, I will have to seek this out. Thanks!