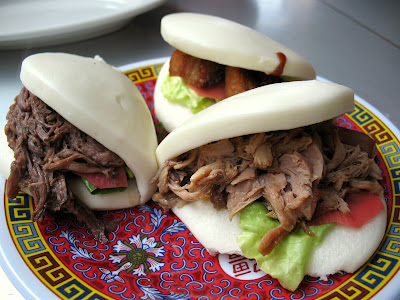 I've had dim sum at a number of Chinese restaurants over the years, but I've always felt disgusting a few hours later. After a delicious meal at Myers + Chang in the South End in December, I knew I had to give their dim sum a shot, as I was sure that post-meal sickness wouldn't set in from their food.

I took along my friends Ann, who had never had dim sum before, and Kristen, who loves M+C for their gluten-free menu. When we arrived at noon, the restaurant was almost empty (although I think the holiday weekend had something to do with it). Our waiter gave us little slips with all the dim sum offerings, and we began checking off our order.

First out were the bao, steamed buns with various fillings. I've heard amazing things about the pork belly (in the back of the photo), but it was my least favorite. The braised short rib (left) was tender and tasty, but the soy braised chicken (right) was my favorite, bursting with salty goodness and perfectly cooked meat. The bao aren't huge, but the short rib and chicken both had tons of meat and were pretty filling. 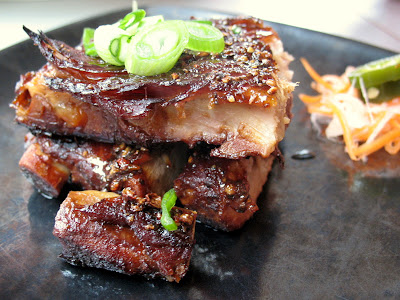 Plates started coming out faster, and we were enjoying every bite. Mama Chang's Pork Dumplings were fantastic - crispy dough with intensely flavored pork without the greasiness inherent in so many dumplings or potstickers. The tea-smoked pork spare ribs (above) were lacquered with a sweet and sticky coating which crisped up all the edges of the meat. The fried rice with pork and pineapple was fine, but I wasn't wild about it. I definitely appreciated the wide range of flavors (and I loved the fried slivers of shallot on top), and the balance between sweet and spicy and savory was on point. 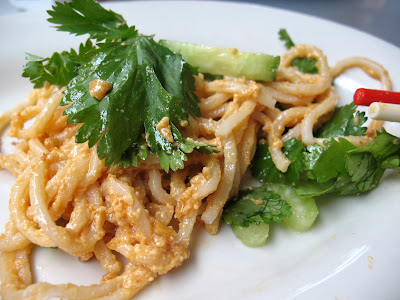 Thankfully, all of the plates are small enough that you can order many different things to get tastes of everything (my favorite way to enjoy a meal). The dan dan noodles (above) were plenty spicy, and the cucumber on top helped cut the heat. The Thai ginger chicken vermicelli was a big hit, especially with Ann, who normally hates Thai food and would never even order anything with the word Thai in it. We also ordered the edamame and celery slaw with candied lemon, which is not usually on the dim sum menu but they added it for the gluten-free menu. I love this stuff and could eat it every day. The savory sesame oil and the sweet lemon peel both bring out the fresh flavors of the veggies - so tasty!

We ended up ordering more than we intended, mostly through some miscommunications with our waiter. So if there's one thing I would do next time, it would be to only ask for a second menu sheet instead of verbally giving an additional order to the waiter. We ended up with 3 of some dishes (where we only wanted 2), and a few things got ordered that we never asked for. It wasn't that big of a deal, though, because everything was delicious and we didn't mind having more of it to enjoy.

Really great photos Pam! Yet another restaurant to add to my "to eat" list. You know you're really wreaking havoc with my whole diet & exercise plan ;)

Erin, I had this for breakfast and homemade bread and pasta for dinner and still managed to lose 2 pounds this week. It can be done!

I have found that it extremly important NOT to go at the end of Dim Sum. I had some bad experiences that way.

Woodsman, while I think that's true at most dim sum places, especially where they bring the food around by cart, I don't think that's the case at Myers + Chang, where everything is made to order.

Lettuce in "gua bao"?! THE HORROR.

Lhydium, I'm sure it's not authentic, but it tasted fantastic

Great blog! May I ask, was this dim sum expensive? I am originally from Boston and go back often, looks like a place I would love to try.

It's not as cheap as dim sum in Chinatown, but the quality of the food definitely makes up for that. Dishes run between $3 and $6.