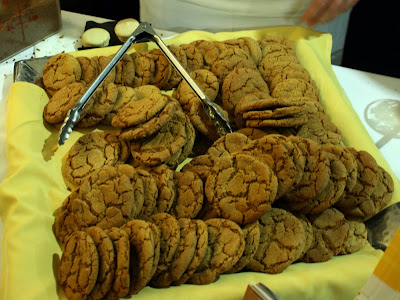 I'm a big fan of ginger in all its spicy, cold-curing glory. I love both ginger ale and ginger beer (what a surprise that was, the first time I ordered a ginger beer...), and I always keep a bag or two of candied ginger around (Trader Joe's makes it without the sugary coating, too, which is so much tastier). But ginger has never seemed like an overly popular flavor past ginger ale when you're sick and gingerbread at Christmas (don't even get started about ginger hair).

Imagine my surprise, then, at an entire event organized around this zesty tuber. eatBoston, who helped organize this past summer's Ice Cream Showdown, put this together, hosted at Grand in Union Square and benefiting the Somerville Arts Council. Little tables were set up all around the store, and five local restaurants served up their best ginger dish.

Ronnarong Thai Tapas, Tupelo, and Petit Robert Bistro all presented hearty savory dishes. Ronnarong's ginger chicken stir-fry (I don't know if it had a real name) was the ideal Thai dish, with perfectly cooked veggies and amazing flavor coming from the huge slivers of ginger. Tupelo's ginger-infused gumbo got it's spice from the ginger in a nice sinus-clearing way, and it was a good spin on the traditional dish (now if only Tupelo would put it on the menu). Petit Robert's ginger veal stew was less gingery after the other two, but the meat was perfectly cooked.

I love how versatile a spice ginger is. It works wonderfully in savory dishes, but it almost works better in sweet desserts. Petit Robert offered up a second dish of ginger macarons (I had my very first macaron at Petit Robert, but I favor their floral flavors over this ginger one). Bambara made classic gingersnap cookies, which had a nice chew and plenty of ginger flavor (although I was hoping for something that more directly represented their menu). Picco served little bites of their amazing soft gingerbread, which is more of a cake than anything. At Picco, the gingerbread is served hot with ice cream and caramel sauce, but it was just as good on its own here.

Of course, eating all this good food got me thirsty. Thankfully, Bambara had gingerbread martinis (with crushed gingersnaps on the rim), and Ronnarong had a hot Thai Toddy, with black tea, sake, ginger syrup, ginger, and lemongrass. I'm pretty sure that toddy would cure any cold, and the next time I'm feeling under the weather, I think I'll have to make a stop at Ronnarong. (They also have a housemade ginger soda on their menu, if sake isn't your thing).

Now, of course, I'm craving ginger and want it in everything I eat. I especially have a hankering for Grasmere Gingerbread, this crazy delicious stuff that's only made in one shop in the small town of Grasmere in England. At least Picco was handing out the recipe for their gingerbread - may have to give it a try this week ;)

That sounds like a great event! I just recently fell in love with cooking with actual ginger - chicken lettuce wraps! I want to find more recipes where I can use it.

Also, I had never heard of ginger beer, where can you get it?

Mmm, chicken lettuce wraps are tasty! Do you have a specific recipe you use?

Ginger beer is still just a soda, like ginger ale, but the ginger flavor is much, much sharper. It's a key ingredient in Dark and Stormy's (which are typically Gosling's dark rum and ginger beer). It's usually next to the ginger ale in the market (sometimes only in the organic section), and usually in small glass bottles.