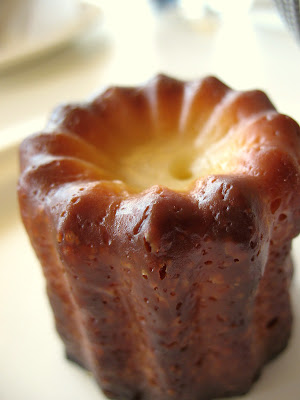 When you find a good bakery, it feels like you've struck gold, especially when you bake fairly well at home. It's easy for bakeries and restaurants to make desserts that are sufficient, but to make them extraordinary takes a lot of talent. I had heard good things about Bread & Chocolate in Newtonville, but I certainly wasn't expecting to find such a boon of deliciousness.

When my friend and I arrived, we wanted to jump right into eating the desserts, but we were slightly more virtuous and ordered a sandwich first. The Pesto Chicken Salad Sandwich was light and flavorful and thankfully light on the mayo. The chicken was good-quality white meat chopped into chunks. I really liked the addition of pesto to the mix, as it made the whole sandwich taste less mayo-y. And the bread was fresh from Iggy's, chewy and crispy and a nice foil to the soft filling.

For dessert, I went with a canelé - a small French pastry that I had heard about but never tried before. From the first bite, I was in love - chewy and crunchy on the outside, creamy and custardy on the inside, delicious all the way around. The canelé was small enough that I didn't feel like I was eating a huge pastry, but large enough to be satisfying. If all canelés are this good, I may have found a new favorite dessert... 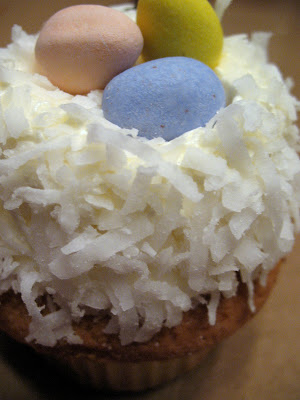 I had heard the most about Bread & Chocolate's cupcakes, and luckily, I ran into a classmate outside, who recommended that we let the cupcakes warm up to room temperature before eating (they are kept in a refrigerator case). We chose a few different types, then headed home. After dinner, we pulled out the box, and oh my god, the cupcakes were amazing. I chose a chocolate cupcake with peanut butter frosting, topped with ganache - I may or may not have ended up with it smeared all over my face in my exuberance to shove it into my mouth. The cake itself was soft and moist, not dry like almost every other cupcake shops', and the peanut butter frosting was perfectly flavored - and they didn't leave out the salt! However, the ganache had cracked by the time we got home, so no pretty picture. Instead, you get a pretty pic of a pre-Easter coconut cupcake, which was equally delicious and perfectly baked.

Over all, I was tremendously happy with Bread & Chocolate. I'm ready to go back to try more things (although I'm sure I'll have a hard time not order a canelé and a peanut butter chocolate cupcake).

Bread & Chocolate? All you're missing is red wine! Sounds good to me!

mmmmm...we love chocolate too and this sounds heavenly

A non-dry cupcake from a bakery what a novel idea ;) That little birds nest decorating theme is adorable. Thanks for the heads-up.

I love your shot of the cannele or canalé if you prefer. Really captures it. I am comptely in love with them and make them myself. They sell them in the grocerys store here, but they are terrible. They're pretty darn easy to make, but you have to follow the recipe closely. Here's mine: canneles. Cheers and happy eating!

Nancy, you bring the wine, I'll bring the cupcakes :)

It's hard, Erin, when you bake well at home! But this is definitely a good choice if you don't want two dozen of the same thing ;)

Brico, thanks for the recipe - I definitely want to give them a try (I even went looking for a pan last night!).

wow, i need to try that place out!!