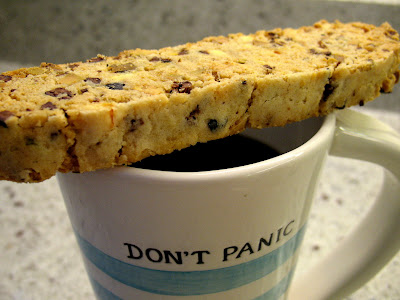 Early in December, my father and I dropped my mother off at the Cambridge Center for Adult Education (for a class on gold leafing, which she has wanted to learn for ages), then headed off to tour the Taza Chocolate factory (along with roughly the entire chocolate-loving population of the greater Boston area). In pure Augustus Gloop fashion, we tasted everything they had to offer, including their cacao nibs (both plain and panned in chocolate). I could have bought one of everything in the store, but keeping my budget in mind, I grabbed a tin of nibs, intending to do some baking with them, and headed on my way.

Cacao nibs are chocolate that has been roasted and hulled but not yet ground into a paste, mixed with sugar and other ingredients, and formed into chocolate as we know it. They're not sweet, and they're not particularly chocolatey either. Instead, they're crunchy and nutty, and I usually taste an overtone of banana as well. I like Taza's a lot. They roast their chocolate carefully and in small batches - they know what they're doing.

Onto the baking. My father had been pestering me for a while about making biscotti, something I'd never done before, but he had seen on America's Test Kitchen and wanted to do. I quickly became hell-bent on including cacao nibs and pistachios (my father's favorite nut) in some way. I did a quick search and found these fabulous biscotti from Brownie Points.

These cookies came out perfectly, crispy and packed with flavor. I really like the combination of salty pistachios, crunchy cacao nibs, and sweet and chewy orange peel. I especially enjoyed eating them after they had sat on top of my coffee for a while, like in the picture above - the steam softened them up a bit without needing to dip them into the coffee. Feel free to play with the ratio of pistachios, cacao nibs, and orange peel - include as much or as little as you like. I prefer lots of little bits in my biscotti, so I added probably a little more than is called for in the recipe below. The base of the recipe is great, too, so you can use it with whatever mix-ins you feel like.

Mix together the eggs, butter, and vanilla until well combined. Add in the baking powder, salt, sugar, and flour, and mix thoroughly. If the dough is too sticky, add a little more flour. Add in the pistachios, orange peel, and cacao nibs and mix until distributed evenly.

Divide the dough into two halves and form them into two logs (kind of like the shape of a ciabatta loaf). Place logs on a parchment paper-lined baking sheet and bake for 30 minutes, until the top is slightly golden brown. Remove the logs from the oven and allow to cool completely.

Lower oven temperature to 325°. Cut logs into 1/2-inch thick slices. Place the slices back on the baking sheet, cut sides up (you may need a second baking sheet for this). Bake biscotti for 10-15 minutes on each side, then cool before eating.
Posted by Pam at 10:08 AM

OMG. The mug. THE MUG! Where, pray tell, did you get the mug?

Isn't that thing awesome?! It's from Pier 1, bought probably 2 years ago now. I wish I had a dozen of them.