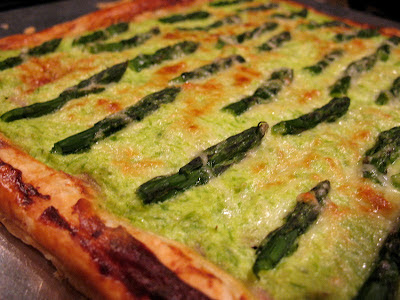 That was the direction we were given for dinner last night. None of us could really decide what we wanted, so the challenge of "creamy" was thrown out there. Ann and I spent quite a while perusing Tastespotting, various blogs, and saved recipes to see what we could find. Eventually, I found this recipe from Bon Appetit, and we all agreed that it sounded fantastic.

It wasn't until we were actually eating it that we realized just how creamy and delicious it was. The puff pastry was light and airy, the ricotta and asparagus puree tasted like spring, and the Comté cheese (which smelled like feet while it was being grated) added a nice saltiness and just a hint of tang. The recipe, with our revisions, is below.

And of course, as I've mentioned before, it irks me that puff pastry comes two to a package, making it necessary to use both. Ann devised a raspberry chocolate tart with the second half that was just amazing. I'm pretty sure we'll be hanging on to both of these recipes for a while.

Preheat oven to 400°. Roll out dough slightly, to mend creases. Cut a half-inch-wide strip from each side. Brush the edges of the dough with egg, then top with the strips to form a raised border. Brush the border with egg; reserve rest of the egg. Transfer to a baking sheet and set in the fridge to chill.

Blanch asparagus until tender, about 3 minutes. Immediately move to an ice water bath to stop the cooking. Drain, and snap the tips off the stalks and reserve. In a food processor, puree the asparagus stalks with the remaining egg. Mix in the ricotta, oil, salt, and 1/3 cup of the Comté. Remove pastry from fridge. Layer the proscuitto pieces along the pastry, then top with ricotta mixture. Lay the asparagus tips over the top of the ricotta, then sprinkle with the remaining 1/3 cup Comté.

Bake until the puff pastry is browned and the filling is set, about 25 minutes.
Posted by Pam at 10:21 AM

I had this dish as a appetizer at a restaurant recently and it was absolutley delicious!