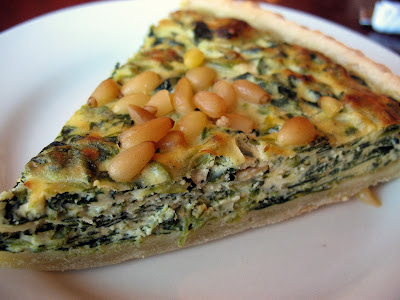 Are pies the new cupcakes? This Bostonist hopes so. From cup-pies at the Piehole on ABC's Pushing Daisies to the opening of Pie Bakery in Newton a few months ago, it seems like we're on the verge of a new flood of sweet treats. But Petsi Pies, in Somerville and Cambridge, has been around since 2003, proving it's not a fad.

Named after owner Renee's childhood nickname, Petsi Pies offers a vast array of sweet and savory pies, as well as other baked goods like scones, creative sandwiches and salads, and a wide range of coffee and tea drinks. It feels a little naughty to have a meal that is entirely composed of pie, but it tastes so right.

The Spinach, Ricotta, and Pine Nut tart makes an excellent meal, although, if you're starving, you might want to pair it with a salad. The crust is tender but not overly flaky. The ricotta makes the filling very creamy, while the spinach brings in a fresh flavor and helps bind it all together. With pine nuts sprinkled generously on top, this is one perfect slice of heaven.

When it comes to dessert, choosing which flavor of pie to have could be difficult. The Mixed Berry is amazing - juicy, sweet, and tart, filled with luscious blueberries, strawberries, raspberries, and blackberries. The Peach Blackberry is another flavorful fruit pie, with a crumb topping that makes it feel like a crisp in pie form. Both are served warmed, which brings out more of the amazing flavor. The Sweet Potato Pie is another luxury. It's less sweet and more starchy than pumpkin pie, but the sweet potato is rich and flavorful nonetheless.

Petsi Pies has two locations (285 Beacon Street in Somerville and 31 Putnam Avenue in Cambridge) and is open Tuesday through Friday 7am-6pm, Saturday 8am-4pm, and Sunday 9am-2pm. They are closed on Mondays.

But Linda, you're in cupcake central!

They taste even better, Susie!

I went to Petsi Pie's (in Cambridge) every day last semester. It's such a great place to drink coffee and catch up on work...great staff, too!