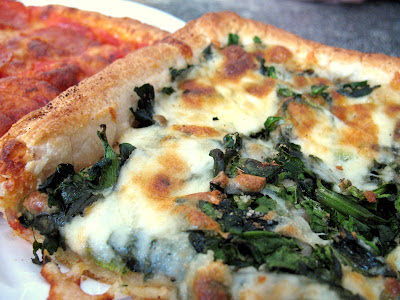 Pizza is the quintessential cheap eats. A slice typically only costs a couple of bucks, and it's fast and portable. One slice, however, is often not enough, and you're left wanting more.

At Pinocchio's in Harvard Square, however, one slice is filling, and two slices, for the low price of $3.95, makes a full meal. The Sicilian slices are hefty, especially if you snag a corner piece. The dough is crispy on the bottom and edges, with just a little bit of chew. It's a little hard to cut with the plastic utensils, though, so don't bother sharing your slice (not that you'd want to, anyway).

Pinocchio's has tons of topping choices, and they have quite a few pizzas availble by the slice at any one time. Bostonist tried the pepperoni and the spinach. The pepperoni was a little greasy, but that wasn't much of a surprise. The tomato sauce was on the sweeter side of the spectrum, but this was a nice balance to the salty and oily pepperoni on top. The spinach pizza was even better - sauceless, but with plenty of mozzarella and tons of fresh spinach. It's always good to see veggies handled with a little grace on a pizza, and here, the spinach was allowed to be the focus of the slice. Yum!

If you go back try the tomato basil version - it's the best of the bunch IMHO.

Thanks for the tip!