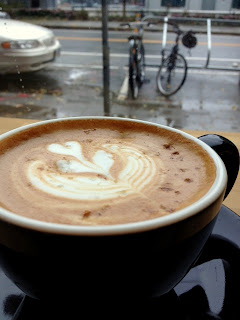 I have been wanting to visit Voltage Coffee in Kendall Square since they opened. I simply can't say no to a well-made cup of coffee, and everything I've heard about Voltage told me that they make one damn good cup of coffee.

So finally, finding myself near Kendall on a rainy morning, I finally stopped in for a leisurely breakfast and some time to read. The space was clean and bright (even despite the gray outside), and there was plenty of seating. I ordered a latte and a muffin and took a seat by the windows. 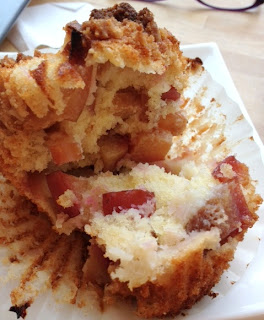 The wait for my coffee was longer than in other coffee shops, but then, other coffee shops aren't making lattes like this. I first ordered a Paper Plane (cardamom, rose water, honey), which I adored. I would have liked the rose flavor to be stronger, but I know most people don't like it as much as I do. If you've never tried cardamom in your coffee (even just in brewed coffee), give it a shot - it's way tastier than the cinnamon that many people put in their morning cup.

To eat, I ordered a plum muffin with crumble topping. There had to be a whole plum in there, chopped into little bits. Although the muffin didn't have much structural integrity thanks to all that fruit, the flavor and texture was impressive. I especially liked the textural difference between the soft cake and the crispiness crumble.

I stuck around long enough that I wanted another drink, so I ordered a Beyond The Sea (homemade caramel and salt). Starbucks' salted caramel has nothing on this one. The caramel flavor wasn't overly sweet, and the salt (big, flaky crystals sprinkled on top) added a pop on the tongue whenever I encountered one. This was one damn sophisticated drink.

It's places like Voltage that make me miss spending time in Boston/Cambridge as much as I used to. You can bet that, if I lived or worked nearby, I would be in this coffee shop ALL the time. And while their drinks aren't cheap, right now they're offering a card worth 12 drinks for $28 - all in all, a pretty good deal. I'm not sure how long they'll be offering these cards, but if you're nearby, you'd be smart to grab one while you can.

Oooh, I love close to Kendall Square but have never been here. I love a good cup of coffee, so I will have to visit soon!