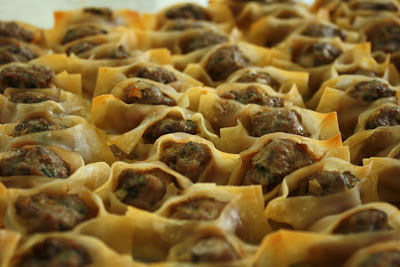 Manti is one of those Armenian dishes that I had only a couple times in my childhood, and while I liked it, it was never something I was eager to have again. I think it may be because the traditional way to serve it, the little dumplings floating in a pool of chicken broth, is rather bland and mushy. In college, I experimented with a number of Armenian recipes, and through a whim, found out that I quite like manti, as long is it isn't served in its traditional way.

Manti is an Armenian dumpling, little balls of ground lamb wrapped in a dough to form a tiny little canoe. The meat peeks out on one side, giving you a hint of what's to come. They're great as a meal, a side dish, or just a snack. Just don't give it to me in chicken broth.

When I first started making these, I made my own dough, rolling it out very thin and painstakingly cutting it into little squares. The dough baked up a little thicker and drier than I liked. I used to freeze the baked mantis and toast them in the toaster oven for a little snack - they reminded me a lot of the frozen mini eggrolls my mother used to buy for me from the supermarket when I was a kid.

A few years later, though, my mother had the idea to use premade dough to make the process go quicker. We had already used refrigerated eggroll wrappers to make sou boreg, another Armenian dish with paper-thin noodles, so we thought it might be worth a try with the manti instead.

Lo and behold, the shortcut manti worked! It's quite different than the kind I used to make - I think I got used to the thick and dry dough - but these seem more like what manti should really be.

Manti is easy to make, but incredibly time consuming. Get a friend to help so it will go faster (you'll have someone to share the whole pan with when you're done, too!). I like to eat them straight out of the oven, but my mother still likes the chicken broth, so I've included that as well. You can freeze these after the initial baking if you'd like (make two trays and freeze one - then you won't have to do the work again later), although they reheat better with the chicken broth. 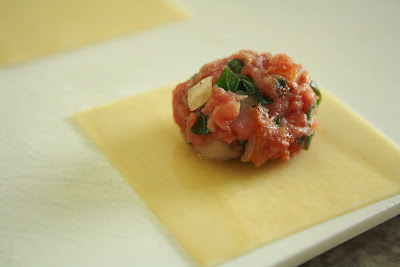 Mix lamb, onion, parsley, and spices together. If you're unsure if it is spiced enough, you can fry up a little bit in a pan to get a taste. Cut each egg roll wrapper into 9 equal square pieces. Roll a pinch of the meat mixture into a ball and place in the center of a piece of dough (pictured above). With your finger, wet along two opposite sides of the dough and pinch together, forming a canoe shape with an open top. (Does this make sense to anyone but me? The wet edge with press against itself, not against the other wet edge.)

Place manti tightly together in a greased glass baking dish, open side up. When you have filled the dish, bake at 350° for 20-30 minutes or until lightly browned (we're not much for setting timers around here, just cooking "until it's done").

For chicken broth preparation, cook as instructed above, then pour chicken broth over manti, cover with tin foil, and bake for another 15-20 minutes.
Posted by Pam at 1:29 PM

These look great! I can't wait to try them.

We always served in a yoghurt broth (chicken broth, yoghurt, and butter) and it was delish!

Your Manti looks awesome! :)I am having it tomorrow at my mother in laws and I have yet to attempt to make it. Off to navigate the rest of your blog :).

RE: The broth presentation -- while the manti are baking, we heat up chicken broth on the stove, and when the manti are done we put them in a bowl and just pour broth over the top (and then top with garlic-yogurt and sumac). They don't get mushy that way -- I could see by re-baking with the broth added they'd get too soft!