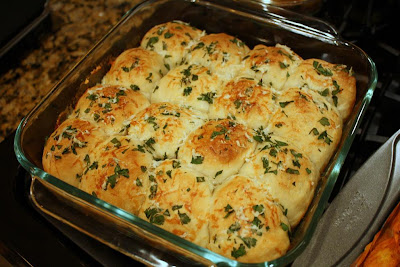 I think I'm like a lot people - I love cheese, but there are probably millions of varieties out there besides the ones I'm familiar with. I could probably count the types of cheese I buy on both hands. So when Ile de France offered to send me Chaumes, something I'd never heard of, I jumped at the chance.

Chaumes is a bit unique, but it's not wholly unlike other cheeses that I was familiar with. It's soft and creamy, much like brie (a tad harder, though), and has a bit of bite like a sharp cheddar. It has a great nutty flavor and a smell that is harsher than its taste. The orange rind is edible, but I wasn't wild about it.

The package arrived when I was babysitting my nephew and nieces, and they were eager to know what was inside. Luckily, they were more interested in the bubble wrap than the cheese itself, and I quickly stashed my goods in the fridge while they weren't looking.

Flash-forward to last night, when I offered to make dinner for my friends who were busy playing Dungeons and Dragons (I've played with them, but I'd rather be cooking than rolling the dice). I knew the group liked bread and cheese, and I was already making a cheesy pasta dish for dinner, so I decided to experiment with the Chaumes I had been sent and make rolls. The resulting bread had everyone clamoring for the extras, and there was discussion of when I could make them again. Fact is, they were so simple, it's only a matter of getting my hands on some more Chaumes!

Preheat oven to 400°. Brush olive oil onto the bottom and sides of a square baking dish.

Divide dough into 16 equal pieces, and cut cheese into 16 equal pieces. Roll each piece of dough into a ball and flatten slightly in your hand. Sprinkle a few pieces of parsley on the dough, top with a piece of cheese, and wrap the dough around the cheese, pinching the edges to seal. Place the roll seam-side down in the pan. Repeat with remaining ingredients. Brush finished rolls with olive oil and sprinkle remaining parsley over the top. Grate parmesan over the top (as much as you'd like). Bake for 15-20 minutes or until the top is golden brown.
Posted by Pam at 4:35 PM

wow, I wish people would send me cheese! :) I haven't had a carb in 2 days, I could probably eat that entire batch of rolls right now

Literally just passed out staring at that. There is really nothing better than cheese and bread. Period :) Way to go!

Thanks, guys! Yes, there truly is nothing better than bread and cheese - and these are so easy, it's silly not to have them!

Love this idea. Never thought of wrapping the dough around a piece of cheese. I don't know why! These look delicious.