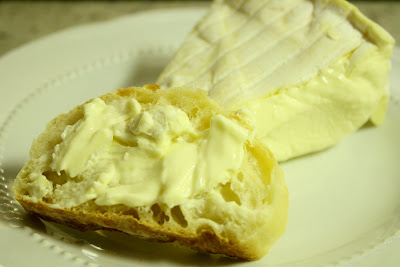 Brie is probably my favorite cheese (I know, there are so many, it's hard to pick just one!). For years, I was accustomed to the stuff from the supermarket, and I loved it because it was creamy and decadent. Oh, I had no idea what I was thinking.

When I was a teenager, on a visit to France, I had some amazing, runny brie that was miles above (streets ahead?) what I'd had at home, but I chalked it up to foods being better in their countries of origin (after a similar trip to Greece, I wouldn't eat feta at home for months).

So when my friend Ann picked up this brie, I figured it would be just like any of the other creamy but indistinguisable cheeses out there. But no, this stuff is completely different - even creamier, with just enough bite to make it interesting and just a little bit of nuttiness. We've taken to calling it "crack brie", because we all crave it like crazy and will go through a piece like piranhas going at a cow.

But where does this magical brie come from? Wasik's in Wellesley, a fantastic cheese shop with a staff that knows more about the selections in the store than anyone should ever know about cheese. This brie, called "Brie" de Lyon (in apostrophes because real brie comes from Brie, while this is from Lyon), is a little more than what you get in the supermarket but well worth the money. It goes especially well on slices of baguette with a little bit of fig jam (don't worry, you can get all of this at Wasik's), but it's just as tasty without any accompaniment.
Posted by Pam at 5:05 PM