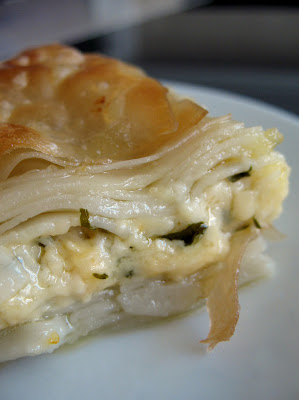 Sou Boreg, like so many Armenian dishes, is this mythical creature that many people talk about eating when they were younger, but would never attempt to make themselves. You can sometimes find it at Armenian markets, usually in the freezer section, and I was amazed to find it available every day on the menu at Brookline Family Restaurant, the Turkish place down the street from me.

The biggest reason why you don’t see this more often is because it’s such a time intensive process. This is one of those dishes that, in the old days, the ladies would have gathered together to make in mass quantities, helping each other and gossiping at the same time. While we were making this, my brother hypothesized that such complex dishes were created back in the day to cure boredom and enable gossip time; I favor the idea that they were a way to show off talent (and show off that you had the time to invest in the process) instead. When my mother complained that the process was taking too long, I said that we were at least getting in some bonding time. “Can’t we do something else to bond?” she asked.

Anyway, my mother tried making sou boreg from scratch years ago, and she found it to be more of a hassle than anything. Rolling out the dough took forever because it has to be so thin and even. Then, someone suggested using packaged eggroll wrappers instead, cutting out the steps of making and rolling out the dough. Each individual eggroll wrapper must still be boiled for a moment, shocked in ice water, then arranged on a towel to dry, meaning that the shortcut does not make this a quick dish to throw together. But if you have the time, the patience, and an extra set of hands, the reward is a crunchy, cheesy, buttery treat that will make you forget the effort that went into it. 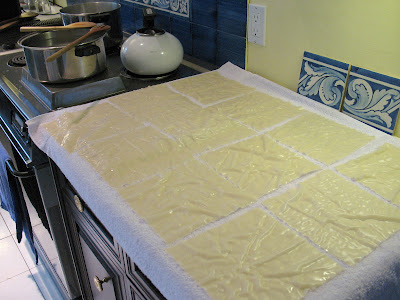 Butter the bottom and sides of an 11x15 inch baking pan.

Bring a large pot of water to a boil over high heat. Fill another pot or bowl with ice water, and lay a large towel on the counter top next to the stove. Working one at a time, boil the first 18 eggroll wrappers in boiling water for about a minute, until just cooked through (they will fall apart if cooked too long). Transfer to ice water to cool the noodle, then lay flat on the towel to dry. Arrange the 18 noodles in the tray – for this size pan, three noodles per layer (2 whole and one cut in half) – and brush each layer with butter. After six layers, arrange cheese filling in an even layer. Boil and dry the rest of the noodles, then repeat layering over the cheese filling. Cover and refrigerate for at least half an hour.

sounds delicious...never heard about this...I have gotta try this....right away M gonna get the ingredients from www.myethnicworld.com and try out this weekend....thanks for sharing.

I don't know a thing about Armenian food, but this looks like a damn tasty place to start my education :)

This looks amazing! And even better, it doesn't look to tough to make. Can't wait to try it!

The creation of Sou Borge brings to mind a Nova Scotian dish, rappie pie. In the past, rappie pie was a very labor intensive dish, taking a couple days to create. Though it usually seemed to be man's job, possibly due to the strength needed to remove all of the starch from potatoes. It became a social occasion for them, to drink, chat and make rappie pie.

Luckily, some things have changed to make its creation easier. You can now buy prepackaged frozen potatoes where the starch was removed. That makes the process much easier and quicker.

wow, i've never seen this, but it looks great!

A recipe steeped in tradition and taste can't be beat!
~ Jen / palatetopen.com

Thanks guys! It is a truly delicious dish and worth the work.

It is a bit like lasagna, but the noodles need to be cooked one at a time to ensure that they don't stick together - that's where the real time sink is.

And thanks for that story, Richard! I love hearing about traditional recipes like rappie pie.

okay that intrigued the hell out of me. I am going to have to try and recreate that somehow. Could never get the Brit to eat it since he won't eat lasagna. Although separately cheese, pasta and becehmel or mornay are fine. Somehow layering and combining makes it evil. Go figure.
Was the cheese of the very stinky variety or the mildly stinky?

Jo, I have since made a variation with leftover ingredients where I cut the eggroll wrappers into fettucini-like strips, boiled them quickly, then tossed with the cheese mixture and baked - just as tasty (although not as pretty).

And Muenster is mild and a good melting cheese - some recipes call for half Muenster, half mozzarella, and it's kinda similar to mozz, but a little saltier.

I was inspired by your post and made one with my cousin from scratch today. It came out yammiii

Thank you
you can look at the pics here

Thank you for posting this. Been looking for this recipe for ages. My grandmother made this dish for us the last night we were in Armenia.

i use phyllo to make individual "cocktail size" boregs, as do all of the ladies at my armenian church! for sheet & individual boreg.

Oh man! That looks so good. I want some right now.

Thanks Emily and Janis! Emily, we make regular boreg all the time, but this is definitely a special-occasion treat. We make boreg both in a pan and folded into triangles.

Could you not boil the wrappers and just add a bit of water and longer cooking time?

My family usually makes boureg with fillo dough. We buy it pre-made from the store. it comes in a box with two rolls. Butter the bottom of the pan and lay two sheets at a time buttering each layer of two until the first roll of dough is gone, then add the parsley, egg and cheese and repeat the same process with the second roll and bake on 325/350 for 20-25 minutes.

Just want to say I did try this recipe and had a few friends over. They loved it. People should not confuse this SOU BOREG with the phylo dough or puff pastry cheese filled boreg. Sou Boreg was truly from the old country where women got together and prepared this dish. They type of cheese combination is different and the aroma in the home is out of this world.