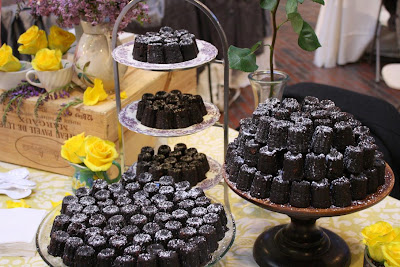 For the second year in a row, NARAL Pro-Choice Massachusetts invited me to be a judge at their annual Chocolate Madness event. It wasn't even a possibility for me to say no.

I arrived just as the rest of the judges were sitting down at the tables in the center of the Cyclorama. The participating bakeries and restaurants had been split up into five groups, and five sets of judges worked their way through their candidates. I was on the "Down to Earth: Mother's Contemporary Candies" table, and we all carefully sampled our five offerings before debating their merits. One point that came up amongst us was that only one choice - Taza's chocolate - could actually be deemed a candy (although I thought Care's Bakery's Chocolate-Covered Caramel Waffles fit the bill as well because just about anything enrobed in chocolate can be considered a candy). We voted based on taste and originality, and when we were done, we were sent to look at all the table displays, to vote for our favorite.

Out of the Fire: Fresh from the Oven
South End Buttery's Bacon and Brooklyn Brown Ale Cupcakes with Espresso Smoothies

My favorite desserts of the evening were:

There are a few more pictures of the event on Flickr.
Posted by Pam at 10:30 AM