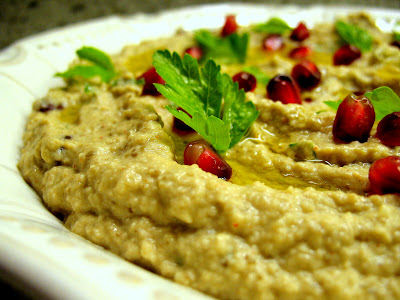 I'm Armenian and I love eggplant, and yet, it has taken me this long to make baba ganoush. I feel like a slacker. But don't worry, I've definitely made more than my fair share of the dip in the past few weeks to make up for it.

Baba ganoush is a Middle Eastern dip or salad which, at its most basic, consists of mashed eggplant and spices. It's an easy enough recipe that only takes a few minutes to put together (minus the roasting time, of course). It's simple, and yet, no one can decide on one recipe. My Armenian cookbook has four different versions (of course, that cookbook typically has four different versions of every dish, so this isn't saying all that much). I've played around with the recipe enough that I think I've found my version of baba ganoush. How do you like to make baba ganoush?

Oh, and seeing at pomegranate season has officially begun (I recently picked up a HUGE pomegranate from Pom Wonderful at the supermarket and couldn't wait to start peeling), and that means it's time for me to start throwing pomegranate arils into anything and everything I make. So into my baba ganoush went a handful of arils, along with some on the top for garnish, and it was love at first bite. The body of the dip is garlicky and salty with an unctuous creaminess, and the pomegranate adds little bursts of sweet freshness that makes this dip a little different (it's the same concept as my pomegranate guacamole).

Preheat oven to 350°. Prick the eggplant with a fork, then set on a rimmed baking pan with 1/2 cup water. Bake for 45 minutes to 1 hour, or until the eggplant is soft all the way through. Add more water to the pan as needed; the steam will help the eggplant cook.

Let eggplant cool until it can be handled, then peel off the skin. Combine the eggplant, tahini, 1 Tbsp olive oil, salt, cayenne pepper, lemon juice, and garlic in a blender (or a large bowl if you are using an immersion blender). Blend until smooth and combined. Stir in 3/4 of the pomegranate arils and chopped parsley. Add more salt and cayenne pepper to taste.

I've always wanted to learn new ways to use eggplant. So far I just know how to turn it into eggplant parmesan.

I make something I've dubbed "green eggplant goo" during the summer that owes its inspiration to baba ganoush: roasted eggplant, a little almond butter, a lot of basil, a little raw garlic, a little olive oil, all blended together and slathered on bread. It's not as dubious as it might sound. :)

Eggplant parm is a good way to go, Susan, but it's always good to have more than one trick up your sleeve. My favorite way to make it,though, is just to slice it thin, top with cheese (mozz or parm), and bake until cheese is bubbly and golden.

Adele, that sounds great (and very very similar to this). Like I was saying, there are a million and one recipes. It's a great recipe to use whatever you have on hand.

ooooooooooo i love pomegranates and baba ganoush! what a great idea to combine them! bookmarked!