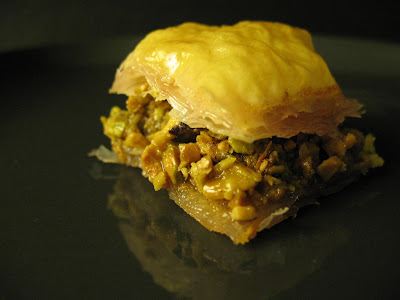 As a second entry into PAMA's Pomegranate Month recipe contest, I decided to update an Armenian classic with Pomegranate Paklava. Armenian paklava is usually less sweet and gooey than Greek baklava, which I am in favor of, but I've still never really liked it. My mother makes it with walnuts, possibly the worst nut out there (I'll eat Brazil nuts before I eat a walnut!), and I've always felt that pistachios are a more fitting nut for this pastry anyway. Adding pomegranate seemed like a natural step. I'm really happy with how this turned out, and although I'm still not a fan of paklava in general, I'd be much more likely to eat this fruitier version.

Combine chopped pistachios, 2 Tbsp sugar, and cinnamon in a bowl and set aside.

Unroll phyllo dough and cover with a damp cloth to prevent it from drying. Brush melted butter over the bottom and sides of a 13×9 pan. Lay one sheet of phyllo dough on the bottom of the pan and brush generously with butter. Repeat with two-thirds of the phyllo sheets, ending with a brushing of butter. Spread the pistachio mixture evenly over the dough, making sure to spread all the way to the edges. Top with the remaining sheets of phyllo dough, each brushed with butter. Cover the pan and refrigerate for an hour to let the butter harden.

Preheat oven to 350 degrees and cut the paklava into squares or diamonds, making sure to cut all the way through to the bottom. Bake for 25-35 minutes, or until golden brown.

While paklava is cooling, combine PAMA Liqueur, water, and 1 cup of sugar in a small saucepan. Bring to a boil over medium-high heat and stir to dissolve the sugar. Pour hot syrup over paklava; if you like a paklava that is a little less sweet, use less of the syrup. Re-cut the paklava (the edge of a spatula may give you better leverage than a knife). Serve on a platter or in individual paper baking cups.
Posted by Pam at 2:45 PM

Thanks Shannon! The best part about this dessert is that a little goes a long way - one piece or two and I can't handle any more :)