ONCE Upon a Midnight Dreary

From the very first time I heard about Cuisine En Locale's ONCE, I've been dying to go. ONCE stands for One Night Culinary Event, and the concept is that JJ Gonson and her friends put together a special dinner party (with some loose theme) for that one night only. So I've been longing to go to one for about a year now, and between my schedule conflicts and other ONCEs filling up too quickly, ONCE Upon a Midnight Dreary (hosted the night before Halloween) was the first one I could make.

The first email I got from JJ just said that the night was going to be scary. I can handle scary, I thought. It wasn't until a night or two before that I realized just how scary this night would be.

I like to think I'm pretty open-minded about a lot of foods - I'll give most things at least a taste. But this meal, focusing on offal (oh, and bugs!), really pushed my limits. Having said that, I'm pretty damn proud of how much I did end up eating.

I'm looking forward to JJ's next ONCE that is perhaps a little less trying. I loved everything about the evening except some of the ingredients, so I'm definitely excited to see what else JJ and her crew can do. 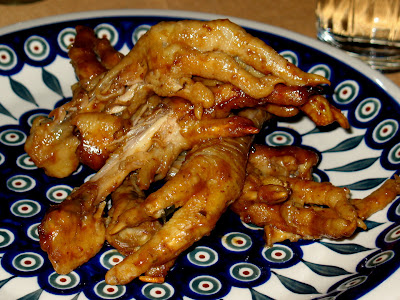 I had invited some friends to join me for the evening, but in the long run, I'm glad they didn't come. So I walked in alone and stood there awkwardly for a minute before being intercepted by JJ. We had emailed back and forth a few times, and I was excited to finally meet her. She directed me over to a table right next to the kitchen so I could see everything that was going on. I settled in, opened my wine, and started talking with my fellow diners (all first-time ONCE attendees). Sitting next to me was Benjamin Eckstein, a video photographer and producer, who took amazing photos all night - some of his photos can be found on LimeyG's blog (who also has her own great write-up for the night and was sitting at the table behind me).

The meal started innocuously enough - chicken liver pate on amazing fresh baguettes. That bread proved to be my saving grace for the evening. The pate was quickly followed by a Thai-spiced soup featuring fish heads and hoisin-glazed chicken feet. The soup was so wonderfully spiced, heady with fresh ginger and peppered with super-thin slices of veggies (I avoided a fish head, much to my relief). The chicken feet, made with homemade hoisin sauce, were most definitely not my kind of thing - I don't even like chicken wings - but now I can say I've had them (that kind of thinking came up a lot during the night).

Beets in aspic were up next, and were featured more for their creepy looks than their actual grossness. The beets were tender and sweet, and the blood-red aspic was surprisingly salty.

And then things got really weird. JJ introduced David Gracer as "the bug guy," and he started serving up the bugs. Crickets and mealworms were sauteed into some rice, and then cockroches and giant ants were passed around. They all grossed me out, and I silently promised myself that I wouldn't try one. But when one of my fellow diners said the crickets weren't that bad and had the texture of roasted asparagus tips, I gave it a shot. Can't say I'm not going to think of them the next time I have asparagus, though... (To learn more about eating bugs, watch David Gracer on The Colbert Report - thanks again to LimeyG for finding the video!)

A little earlier in the evening, a dish of offal had been passed around the room, and everyone took guesses as to what it was. Someone at another table guessed buffalo spinal cord, and they were right. It went into the oven (for only about a minute), was cut up into tiny little bites, and was passed around as another tasty treat after the bugs. It looked much better once it was cut up. It tasted a lot like an oddly cooked egg - chewy on one side and like undercooked egg whites on the other. 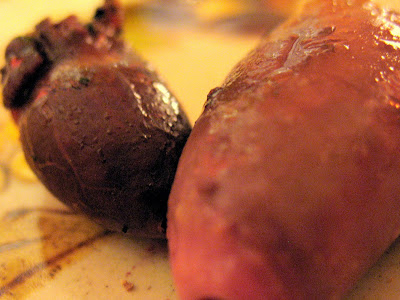 Courses started to come out a little slower as they were more time-intensive to make. That was fine for me, as it gave me plenty of time to drink more wine (and prepare myself for what was to come). Skewers of chicken and rabbit hearts were brought out (the chicken was the smaller of the two) and served alongside black beans and chorizo. ("You'll eat chorizo but you won't eat hearts?" JJ asked.) The hearts were meaty but rubbery (obviously, because of all the work they did prior to their second life as dinner). We also had sauteed kale with some kind of larvae - I usually love kale, but I couldn't make myself eat more than one bite of this.

Next out was the kidney fricassee, served on puff pastry. Um, I liked the puff pastry :) 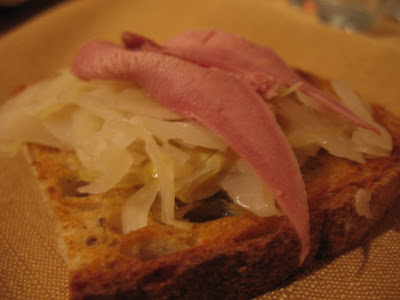 Tongue was yet another dish I figured I wouldn't like at all, but surprisingly, this was my favorite dish of the whole night. The lamb tongue was served as paper-thin slices in an open-faced Reuben sandwich (featuring homemade Thousand Island dressing and sauerkraut). The tongue was amazing - it was so tender, it completely melted in my mouth.

The pig head cake was the final savory dish of the night. It was composed of all the meaty bits of the pig's head, bound together with a bit of aspic, then fried. Everything is better when it's fried, but still wasn't big on the whole eating-a-head thing.

Dessert was simple and elegant, even though it contained bugs (at least one, possibly two kinds). A slice of watermelon, topped with a small piece of giant water bug, and a poached pear with creme de marrons (pureed chestnuts which may or may not have contained some worms). At this point, I was tired and pretty grossed out by everything that had crossed my plate during the night, so I only nibbled on this.

When it was time to go, I made sure to give JJ a big hug and let her know that, while there was nothing in our meal that I would ever order, I loved having the opportunity to try everything. I'm definitely looking forward to attending another ONCE (albeit one with more typical ingredients).
Posted by Pam at 10:25 PM

Oh man, I heard lots of good things about ONCE! Such an interesting, unique experience... Good for you for trying everything :)