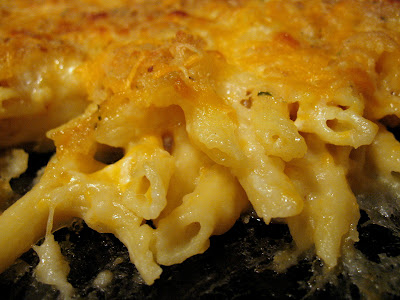 There's nothing better than something hot and cheesy when you're not feeling well. My friend Ann had surgery last week, and since her husband is proficient in the kitchen but not great, I've volunteered to help with the cooking when I can. As I was headed to her house the other night, I asked what she wanted for dinner. She immediately said mac and cheese.

I've told her about my Squash Mac and Cheese a few times, and she seemed interested in it, but when I brought it up while we were on the phone, she vetoed it for a more standard recipe. Which was a bit of a problem, as I had never successfully made a more typical mac and cheese before - something gooey and creamy. I've tried all kinds of recipes, including plenty of custardy ones, but those always just end up too eggy. When I'm feeling especially lazy, I just toss pasta with shredded cheddar and bake to brown a bit.

So naturally, when Ann asked for regular mac and cheese, I was a little worried. I knew I didn't want any eggs, and I knew that I wanted a roux to act as thickener. With a little research and recipe comparison online, I cobbled together a few ideas and prayed for the best. I'm very happy with how this turned out (and that I was able to find a recipe that replicated the "real" thing). But really, how can you go wrong with so much cheese?

Preheat oven to 350°. Cook pasta according to package, drain well, and set aside.

In a large bowl, combine milk, flour, and garlic salt, and whisk until well combined. Add in the pasta and 4 cups of cheese and stir to combine. Pour mixture into a lightly greased baking dish (13x9 would be best). Sprinkle the rest of the cheese and the breadcrumbs over the top of the pasta, then drizzle with the melted butter. Bake for 45 minutes or until the top is golden and bubbly.
Posted by Pam at 10:32 PM

I've always used the recipe in Fanny Farmer. Everyone I've made it for LOVES it. You make a bechamel sauce (white sauce) then add cheese. This requires some patience and stirring. Then pour it over the cooked noodles, cover with more cheese and bread crumbs, bake until bubbly then enjoy! I agree, True Comfort!

Whoa! Mac Cheese! Simply yet a great recipe. Hey, just an opinion if you have time why not submit this to Foodista.com a new and free food encyclopedia. Don’t forget to register first so we know who to thank the recipe for. Thanks! See you there!

This is definitely my kind of comfort food, I bet your friend was feeling better right after the first bite :)!