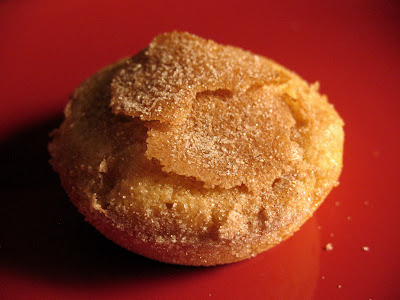 Ah, the first snow of the season. The French Toast Alert System over at Universal Hub is only at Guarded, but I wanted to inaugurate the season with something French toast-like. Sadly, I have no bread in the house (I clearly didn't pay any attention to the FTAS), so I opted for French toast muffins instead. A little maple, a little cinnamon and nutmeg, a sprinkle of sugar - almost better than the real thing.

Combine flour, sugar, baking powder, cinnamon, nutmeg, and salt and mix to combine. Add milk, egg, maple syrup, vanilla, and butter and whisk together until well combined. Pour into a greased muffin tin, filling each cup until 3/4 full. In a small bowl, mix together the cinnamon and sugar for the topping. Evenly sprinkle the topping over each muffin. Bake for about 15 minutes, or until a toothpick inserted into a muffin comes out clean.
Posted by Pam at 11:57 AM

Love the idea! Did you use one of those special shallow "muffin tops" only pans to make these?

I just stumbled upon your blog and my mouth is watering. I must go find lunch now... fantastic!

Erin, I didn't use one of those pans, but my pan is fairly shallow, so it pretty much created that effect. I like how it turned out, too, because each bite guaranteed some of the topping.

Those look so good!!