What's in the Fridge Fresh Rolls 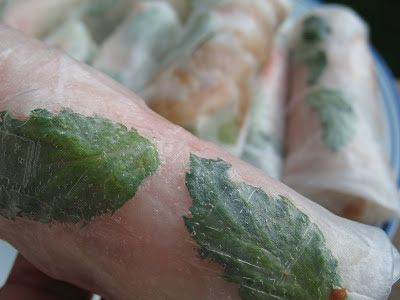 It took me a while to get into Vietnamese fresh rolls - I think it was the rice wrapper that weirded me out - but sometime during the past year, they became one of my favorite foods. I love how simple they are, but how they can contain just about anything. I don't make my own very often, mostly because by the time I know I want one, I no longer have the patience to cut any vegetables up, so I'm usually left to order out. This past week, however, I found myself with both the time and the wherewithal to make my own, not just once, but twice!

One great thing about fresh rolls is, like I said, they can hold anything. Including whatever's floating around in the fridge or freezer that needs to be used. Case in point - one-third of a bag of frozen shrimp that had been taking up space for months. All of the shrimp were, unfortunately, freezer-burned, but once I sliced off any burned bits, there was still enough that was salvageable to include. I threw them into a quick makeshift marinade of teriyaki sauce, lime juice, fresh ginger, and hot pepper flakes while I washed and cut up some other veggies - tiny batons of cucumber and carrot as well as sprigs of cilantro and mint. On the other fresh roll occasion, I used the same marinade (well, soy sauce and honey instead of teriyaki) on chicken, and included leaves of lettuce and slices of mango and avocado.

And making the rolls couldn't be easier. Sure, there's prep work involved, especially if you try to cut everything into pieces of the same length for uniform rolling, but that is well worth the time. Just submerge a sheet of rice paper wrapper into warm water for a minute, until it begins to soften and lose rigidity. Then carefully arrange the fillings in a small pile in the middle of the wrapper. Fold one edge over and around the filling and gently tuck it beneath the filling, pulling tight so that the insides are not at all loose. Then fold the two ends over, sealing the edges, before rolling the rest of the wrapper around the roll. (Gah, did that make any sense?) If you have nice pieces of herbs, like the mint leaves in the picture above, arrange them on the final piece of wrapper so that they show through after you've finished. I usually just serve these with watered-down hoison sauce sprinkled with fried garlic.
Posted by Pam at 8:22 AM

In law school we'd have "spring roll parties" where we'd all sit around a big table and make our own. It was great social eating with a variety of veggies and meats. The hostess made a kickass peanut sauce for dipping.