Obscene Amounts of Food at Maggiano's 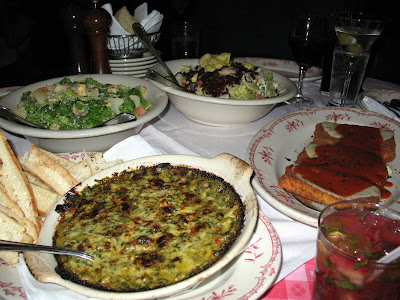 Dinner at Maggiano’s has become a roughly once a year tradition with my friends. We always do the family style meal – all you can eat for $26 – and because there’s so much food, it’s no surprise that we only manage it once in a blue moon. For a chain restaurant with such a low price point for the whole meal, it’s amazing that the food is any good at all… but it is surprisingly tasty (oh, and did I mention plentiful?). In fact, I think the quality is better than many of the more touristy places in the North End. 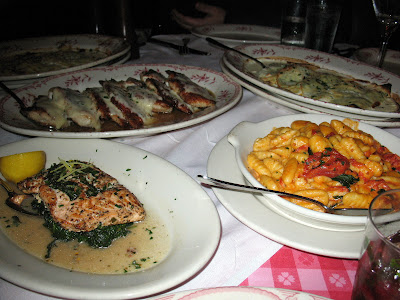 With the family style meal, you pick two appetizers, two salads, two pastas, two entrees, and two desserts, and they’ll bring refills of whatever you want – plus wrap up whatever you haven’t finished so you can take it home. With so many choices, it leaves plenty of room for everyone to get something that they want. 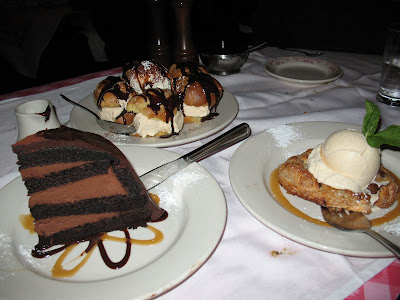 On this outing, we ordered the Spinach and Artichoke Dip, Mozzarella Marinara, Caesar salad, Chopped salad, Gnocchi in Vodka Sauce, Chicken and Spinach Manicotti, Lemon Salmon, Chicken Saltimbocca, Chocolate Zuccotto Cake, and the Profiteroles. The Apple Crostada was given to us as well to make up for some bad service – I don’t know if it was a timing issue with the kitchen or what, but the second half of our meal was mired by longer than normal waits and inattentive service. The food, though, was all delicious. We had to keep reminding each other that more food was coming so we wouldn’t fill up on any one dish. I don’t think I would order the mozzarella (fairly mundane) or the salmon (boring, and more fishy-tasting than I expected) again, but everything else was great – the manicotti and desserts stand out in particular.
Posted by Pam at 11:15 AM

I am going there!

Enjoy yourself, but remember to go very hungry!