For my second Restaurant Week meal, I headed to Tremont 647 in the South End. I've been there before and had a pretty good meal. Their RW menu has lots of different and intriguing options.

The restaurant is small - long and narrow. The tiny open kitchen splits the room into front and back sections; with the kitchen being right in the center, there's a lot of noise in the room. The front bar and patio looked lovely, but we were seated in the darker back area. 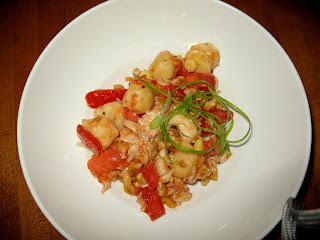 I started with the Crab Gnocchi with Fresh Tomatoes and Caramelized Corn. Everything tasted good, but the flavors didn't necissarily mesh. The part I didn't like, though, was the gnocchi; the texture was just wrong. Is there something between dry and gummy? These gnocchi had an almost grainy texture that was off-putting. 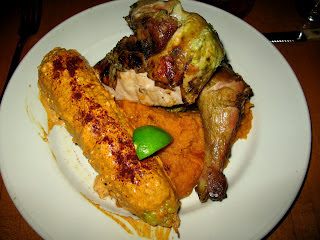 For the entree, I chose the Lemon Roasted Half Chicken with Mashed Sweet Potatoes and Chili Spiced Corn. The chicken was very juicy (although I could only eat half of what I was given because it was a big bird). The mashed sweet potatoes were fantastic, with hints of chili peppers and cumin. The corn was also very tasty, but it's definitely not a dish to order on a date... Luckily, I was with friends who didn't care that I had the sauce all over my face. This was definitely the best of my three courses.

One friend ordered a steak dish and asked for his meat cooked medium. The waitress told him that, since they were so busy, they were only cooking to medium rare. It seemed a little strange, since only about a third of the dishes required the grill and everyone in our half of the restaurant was on their dessert course. When his meal came, though, his meat was cooked to his liking. When he told the waitress, she said "Well, you must have gotten lucky with that." Does that seem like the wrong response to anyone else? 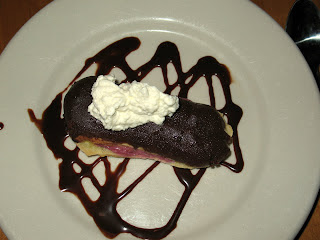 And finally, for dessert, I had the Raspberry Cream Eclair. This just didn't work, in my opinion. The raspberry filling was too heavy with the delicate eclair, while the chocolate topping was didn't have much flavor. The part that really turned me off, though, was the over-whipped whipped cream; it seemed kind of sloppy to have that on top.

The service was also a bit hit or miss with this meal. Besides the meat miscommunication above, we had to repeat things too often. It was like pulling teeth. For about half of our meal, the room was only about half full, so I wasn't buying the "we're really busy" spiel. It was clear that the restaurant was trying to do RW right, but it failed in the details.

I like a bloody steak as much as the next girl, but I am sensitive to those who are raw-phobes. Apparently no one at Tremont 647 shares that sentiment. "Sorry, we're much too busy to actually cook your food." It's not like the poor patron sent back tartare, saying it needed to be cooked longer.

Also a little concerned at the idea of luck having anything to do with what comes out of the kitchen.

It's a popular restaurant though, yes? So one would have to hope it was a case of a grumpy waitress and not someplace that can't handle a full house.

Jenny, I'm glad to hear I wasn't crazy thinking that was a strange response (both from the waitress and on the part of the kitchen).

It gave me the feeling that they didn't know how to cook the steak anyway if medium-rare was coming out barely pink.