Blogging about Writing about Food 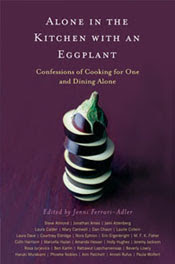 Brookline Booksmith, my local independent bookseller, hosts fantastic readings. I've seen some of my favorite authors (Mark Z. Danielewski, Chuck Palahniuk) read there. I pay close attention to their Ministry of Events author series, especially for books or authors that sound interesting but I've never heard of before.

That's how I became obsessed with getting a copy of Alone in the Kitchen with an Eggplant. I read the description on the events page and knew I had to go to that reading... and being the complete nerd I am, I tend to read the book before the talk. I was greatly disappointed when I realized it hadn't been released yet... so I had to wait until mid-July. I didn't get to Brookline Booksmith for a while, though, so I had to wait to pick up my copy until last weekend (since the crappy Barnes and Noble next to my office never has the book I want).

(Jeff at C for Cooking also fueled my search for this book. He got his hands on an advance copy and started a writing challenge based on the book. He'll be posting submissions next week.)

Man, am I glad I picked this book up. As I've mentioned before, I recently moved into my first post-collegiate apartment and am using this blog as a way to teach myself how to cook. This book, focusing on what it means to cook and eat alone, is exactly what I needed, and I flew through the essays in no time.

Cooking for yourself allows you to be strange or decadent or both. The chances of liking what you make are high, but if it winds up being disgusting, you can always throw it away and order a pizza; no one else will ever know. In the end, the experimentation, the impulsiveness, and the invention that such conditions allow for will probably make you a better cook. - Jenni Ferrari-Adler, in the introduction

I have already noticed this to be true - my inventions are tasty to me (my roommate occasionally says whatever I've concocted is good, but God knows what he's actually thinking), and they have led me down creative paths of culinary expression.

Some of the 27 authors focus on cooking or dining alone. Others discuss specific ingredients or times in their lives. Some include recipes, hoping that by showing you a slice of their life, they've tempted you to take a bite as well. Some are humorous, while others take a more serious bent. This book really has something for everyone.

My favorite essays are:
*Dinner for One, Please, James by Ann Patchett, about finding peace and pleasure in eating alone.
*Beans and Me by Jeremy Jackson, a funny look at a humble ingredient.
*Asparagus Superhero by Phoebe Nobles, about Nobles' quest to eat asparagus every day for two months.
*The Legend of the Salsa Rosa by Ben Karlin, which brought me back to my time in Italy.
*Que Sera Sarito: An (Almost) Foolproof Plan to Never Ever Eat Alone Again by Steve Almond, a hilarious recipe in story form for an open-face quesadilla.
*The Year of Spaghetti by Haruki Murakami, an etheral story about eating Italian in Japan.
*Protective Measures by Jami Attenberg, comparing food to a drug (and rightly so).
*How to Cook in a New York Apartment by Laura Dave, about learning the rules of your kitchen.

So if you're near Brookline, mark your calendar for Thursday, August 9 at 7pm, when Jenni Ferrari-Adler, Steve Almond, and Laura Dave will speak to the Booksmith crowd.

Coincidentally, I did find myself alone in my kitchen with an eggplant (well, 3 tiny eggplants) the other night. I made an eggplant, summer squash and goat cheese pie, using up some leftover pie dough, and it was really tasty - but I don't know if anyone else would tell me they liked it.
Posted by Pam at 9:30 PM

hey pam,
thanks so much for coming last night. we really had a great time, and i truly appreciate the kind words! hope to see you again soon!
-glenn

Steve Almond is a kick...we got to hear him speak at the Decordova last year...he even gave out canday!