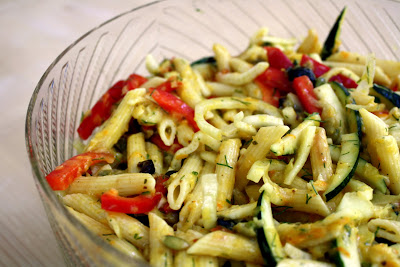 Another month, another stab at a Kitchen Play recipe. (Really, if you're not checking out the monthly Progressive Parties on Kitchen Play, you're missing out. I won a prize for making nachos last month). This month's sponsor was Dreamfields Pasta. I'd seen this brand in the store, but I eat pasta so rarely, I never bother with any of the stranger varieties on the shelf. So when it came time for me to actually buy my pasta and I took the time to look at the Dreamfields box, I was impressed - 5 grams of fiber and 7 grams of protein in one serving, and yet it doesn't taste dense like whole wheat pasta! I'm definitely a fan after tasting the stuff, too.

There were so many tasty looking choices on this month's menu, but I was intrigued by Foodalogue's pasta salad with orange sauce. I just so happened to be on my way to a family gathering, and knowing us, I would need to make something that could sit on the table all afternoon while we grazed (and graze we did, for 7 hours straight - pretty typical for us). Unlike so many pasta salads, this one didn't have any mayo or, really, anything that would go bad in the summer heat. Bonus points for lots of fruit and veggies and plenty of taste in each bite.

I loved how fresh and bright the orange dressing made everything taste. I think I'm going to try it on a regular salad sometime soon.

I didn't plan on making any changes to the recipe, but then, I can never really follow a recipe to the T. I left the garlic out of the dressing and the cheese at the end by mistake, but I actually really like it like that, so I'm leaving it out of my version of the recipe. I doubled the recipe for our family gathering, but the recipe below isn't doubled. I also cut my veggies into matchsticks instead of julienned so they would be the same size as the penne - the better to eat it up, my dear! 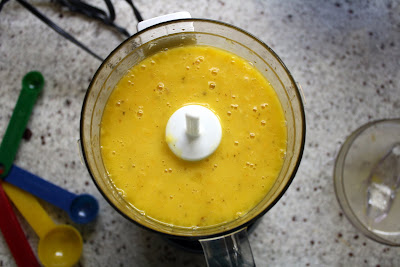 Cook pasta according to package.

In a food processor or a blender, combine peeled orange segments, olive oil, spices, and honey, and blend to emulsify. Season with salt to taste, but remember, there will be more salt from the olives later.

You have the Klutz kids cooking book too, huh? love that one. also, orange sauce pasta. yum.

I'm so happy you liked the recipe -- and to make your acquaintance.

I love the idea of an orange sauce with pasta! BTW, love the new blog design!

Nice redesign!!! I love fennel and orange, and the addition of pumpkin seeds sounds great.

Great recipe! I love fennel and you don't see it much. Great use of it here with the orange sauce and pasta. Going to have to try this one!