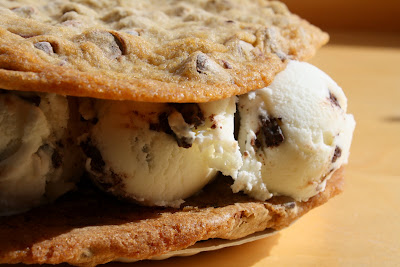 Like I've said, I'm a true Boston girl, which includes loving ice cream year-round. So when I heard about an ice cream shop right in Brighton that was seasonal (all the other seasonal shops I know are way out in the 'burbs), I was surprised. Surely Brighton center could sustain a year-round need for ice cream, right? Also, the fact that 3 Scoops escaped my attention during the years when I lived just up the street astounds me.

Of course, when I was invited to try 3 Scoops, which has just opened for their season, I was happy to oblige. When I walked in, there was just one customer and Raul, the scooper, and as I sampled a variety of flavors, the three of us got into a deep and meaningful conversation about graduate school and, basically, how to do something you love with your life. I'm not sure I got any answers out of the conversation, but I'm pretty sure Raul and I managed to help out the customer a bit. This sort of conversation continued throughout the hour or so that I hung out in the shop, and the environment seems very welcoming to sitting and chatting, much like a coffee shop.

Raul happily plied me with tastes of lots of flavors, including a black raspberry swirl that was sweet and tart and pretty near perfect. Coconut tasted like the real thing, and the mud pie was filled with tasty chunks of chocolate and cookies. My favorite was the mint chip (I'm a sucker for mint ice cream of any ilk), which tasted more like a peppermint patty than other mint chips I've had in the past. Most of the ice cream comes from Coop's, which many people may recognize as Herrell's. Other flavors, especially the special diet flavors - vegan, allergen-free - are made by Raul, who learned to make ice cream while living in Paris.

Raul asked if he could make me a sundae or a frappe, and then he said the magic words: ice cream sandwich with fresh chocolate chip cookies. He started packing more mint chip (my choice) onto a cookie that was about the size of my hand (fingers spread!), then he pushed another cookie on top. This thing was seriously huge, and it would have taken two hungry people to finish it off. The ice cream sandwich is not technically on the menu, but here's hoping that they'll put it on there soon (in two sizes - one cookie or two - preferably).

Of course, 3 Scoops is new to me, although I've spent plenty of time wandering around Brighton Center in the past. I am unclear whether there is new ownership or a change in direction for the store, because none of the Yelp (etc) reviews I read online of the place seem to jive with what I saw. While chatting with Raul, he mentioned that they are discussing whether to do away with the seasonal thing all together, which indicates that the store is trying new things.

As I was driving away, I noticed a new ice cream shop (actually new, as opposed to new for the year), Abbott's, with a big misleading sign that read "Since 1902". I would have stopped in if I had not been full of the previously mention ice cream sandwich. I haven't tried Abbott's custard before, but as far as Brighton Center goes, I'm rooting for 3 Scoops, which serves locally-made ice cream, as opposed to a chain from New York.

Full Disclosure note: The ice cream was provided to me for free by 3 Scoops.

I'm not sure if I'll make it to 3 Scoops since it isn't in my neighborhood but I'll have to agree with you that I love ice cream all year round!

Not sure how long it's been here, but I've lived in Brighton for almost five years now and 3 Scoops hasn't been new since I've been here.

It's hands down my favorite place to get ice cream, even with Athan's slinging gelato a few doors down, even when the Cold Stone Creamery came (and went), and certainly I won't be swayed by Abbott's - especially since I pass it every day and have only ever seen the lights on once, despite the large "NOW OPEN" sign on the building.

I love 3 Scoops sorbets. There is nothing better on a terribly hot day than pink grapefruit sorbet, or a scoop of blueberry on top of a scoop of lemon. In a pinch once I stopped at JP Licks and got a scoop of lemon sorbet and a scoop of lime, and I was so disappointed that I made a point to stop into 3 Scoops on the way home and let them know.

Here's hoping for the return of my favorite special from last summer - coffee and doughnuts ice cream. Amazing.

Well, if you do find yourself over in Brighton on a hot day, you know where to go now ;)

Coffee and doughnut ice cream?! Yes please! I tried some peanut butter and jelly ice cream that was quite tasty, so I'm sure you'll be happy with whatever you try.