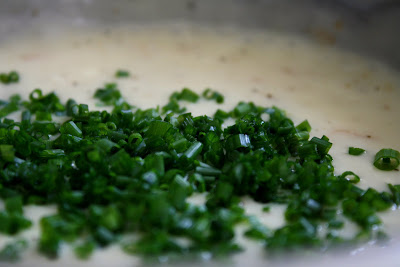 Can I start by saying that it's really hard to take a picture of fondue? Maybe not as hard as soup, but pretty damn close.

Yesterday, my friend Ann and I acted like ladies who lunch and headed to the Melting Pot in downtown Boston to enjoy a leisurely meal, mostly because the Melting Pot was still running their $20 Restaurant Week promotion, and who can pass up that kind of deal? The RW lunch menu includes salad, entree, and dessert, and we added on a cheese course (how could you skip that?!) for only an additional $6 each. I know a lot of people bitch about how RW is a pretty bad deal at most places (I'm amongst that wall of sound), but this is one deal that is well worth it. 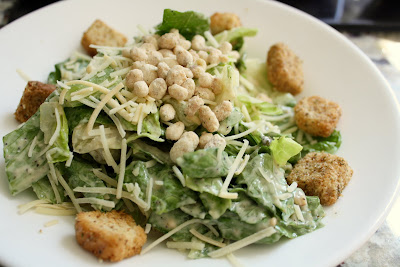 Like I said, we added a cheese course because it's sacrilegious (sacrilicious?) to go for fondue and not get cheese. We tried the special of the month, Fondue a la France, which included brie, fontina, gruyere, and raclette, plus bacon, onions, white tuffle butter, and a sprinkle of fresh chives. This was the best fondue I've had at the Melting Pot (and I've tried a number of them) hands down. Bacon! White truffle! Brie! This was serious not-messing-around fondue.

Our salads came just as we were finishing the last of the cheese. I had gone with the Caesar, and was greeted by a pleasant surprise of parmesan-encrusted pine nuts as a garnish. The pine nuts were on the sweet side and didn't quite work with the salad, but I would have liked a whole bowl of them for a snack.

For RW, the entree is cut down in size, but in reality, it's really all you need. We both chose the beef plate, which included six pieces of beef teriyaki and six artichoke and spinach ravioli, as well as a pile of fresh veggies. I probably ate my weight in broccoli, but I figured that was a good idea knowing there was more decadence to come. I love the leisurely pace that this course takes as you wait for your meat to cook in the boiling boullion.

Dessert was, of course, wonderful. What's not to love about dipping sweets in molten chocolate? We opted for dark chocolate with a shot of Bailey's (a favorite of both of us), and surprisingly, neither of us touched the cheesecake - we opted for more strawberries and rice krispy treats instead.

As I said, lunch at the Melting Pot is one of the rare occasions when Restaurant Week works well.

What the what? They didn't include a cheese course option on the RW menu? LOL.

Regardless...I do like to go to The Melting Pot with groups. It's fun to stuff your face but the best part is cooking everything in broth. I love shrimp cooked in this manner. YUM

I have a gift certificate to the Melting Pot that I still haven't used. You've reminded me that I've got to use it sometime!