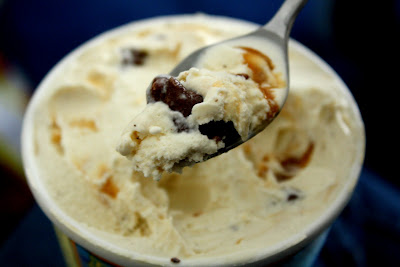 Like any good Boston girl, I love my ice cream. It's not uncommon around here to find people lined up for ice cream on a cold winter's night. I also love desserts that are both salty and sweet, so when I heard that Ben & Jerry's had come out with a flavor in honor of Jimmy Fallon's Late Night Show that involved potato chips and salted caramel, I searched high and low to find it.

(Truth be told, I'm more of a Craig Ferguson fan than Jimmy, but Craig doesn't have his own ice cream flavor...yet. This is my favorite clip from the Late Late Show.)

Supermarket after supermarket didn't have Late Night Snack on the shelves, but I eventually found some and dug right in. The ice cream base itself is a premium vanilla, flecked with Fair Trade vanilla beans, and is sweet and smooth. The caramel runs in ribbons throughout, and its saltiness is more pronounced when eaten with only a small amount of the ice cream. And the chocolate-covered potato chip clusters? Crispy and salty (although the caramel is saltier), but not all-together what I was expecting. 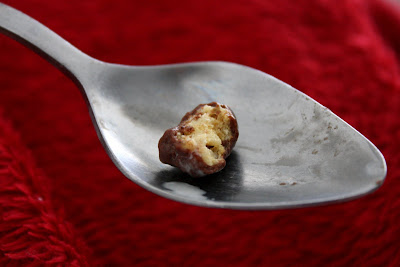 These clusters are more like rice crispies - airy and crackly - than like real potato chips. So after a slight disappointment in not finding real chips, I started to get into the texture of these clusters.

Final verdict? I'm hoping this flavor doesn't go away anytime soon. Much like its sibling, Chubby Hubby (vanilla malt ice cream with fudge and peanut butter and chocolate-covered peanut butter-filled pretzels), Late Night Snack appeals to those of us who like a little savory with the sweet. Unlike Chubby Hubby, where the pretzels are a bite in themselves, Late Night Snack's potato chip clusters are just the right size to enjoy in conjunction with the rest of the ingredients.
Posted by Pam at 6:03 PM

I really want to try this ice cream!

Hell yeah ice cream in winter! Just had some Shaw Farm ice cream myself. I've heard such good things about late night snack. I do love my salty and sweet.

This sounds like such a good combination of salty and sweet - I'm going to give it a try!

Go for it, ladies!