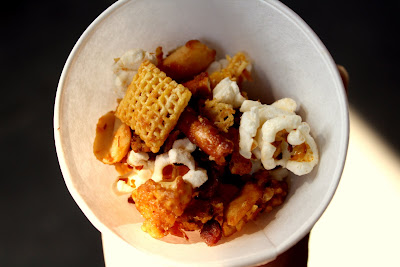 Who doesn't love bacon and beer? Ok, to be honest, me. I only like half of the equation that made up @eatboston and SoWa Sunday's Boston Bacon and Beer Festival, but that didn't stop me from loving every minute of the event.

The event was held at the fantastic SoWa Power Station, a giant shell of a building with towering ceilings - I wouldn't want to be anywhere near this place when the zombie apocalypse happens, but it's definitely a great spot for an event. The line curved down the street, but it progressed fairly quickly - nothing could keep me away from the bacon.

Inside, there were dozens of restaurants and beer breweries set up on folding tables. It was odd to see which tables had huge lines and which had no wait at all. I ignored the beer tables all together - in fact, I think I lost my cup in my bag within only a few minutes - and focused on the food.

There were a few more places that I didn't try because the lines were too long or they just didn't sound good to me, but I was still full when I left. I even went back for seconds from the Gallows and b.good (the second mini shake might have put me over the edge). I thankfully left before it became too rowdy, as the food was running out but there seemed to be plenty of beer.

Overall, the event was a great success. I'm already looking forward to next year...
Posted by Pam at 10:09 PM

I am right there with you! I didnt even take a beer cup! Great review- Im sorry I missed you!

Great rundown! We had to miss this b/c we were on a Chocolate Tour of the South End (that didn't suck) but we got to taste the Buttery's contribution and I agree, they were scrumptious.

Awesome recap! And I agree - great event, although I must say I loved the chocolate covered bacon! That little BLT is from Stoddard's - that was one of the best things I ate that day.

Sorry to miss you too, Fiona!

Sarah, a chocolate tour doesn't sound like such a bad thing :) At least you got some bacon!