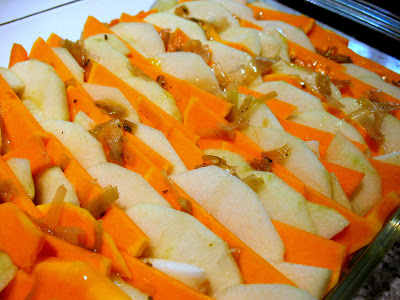 Like I said, I’ve been trying to use apples in any way possible. I love the combination of apples and cheese (enough so that my regular apple pie recipe uses gruyere in the crust) and figured that a savory dish featuring both ingredients couldn’t be a bad thing. After a quick search, I came up with a Martha Stewart recipe for a butternut squash and apple gratin. There were many things about it that I didn’t like, though, so I changed it around substantially and turned it into a much prettier dish. (The original called for laying down the squash, then the leeks, then the apples, and topping with parmesan. I think it looks much better when the squash, leeks, and apple are all layered together like above, but if you’re pressed for time, you can try it the easier way.)

As I was making the gratin, I kept thinking that there was no way that four of us were going to be able to eat the whole thing in one sitting (as part of a meal that also included a pork tenderloin). But from the first bite, it was clear that this dish was fantastic – we polished the whole thing off first. The apples and the squash cook down until they’re just barely holding onto their shape, and the cheese helps hold the whole thing together (while also adding some much needed saltiness to the sweet fruits). This is definitely a warm and comforting dish that would pair well with just about any fall meal. I wish we had had some leftover, if only so I could see how this did when reheated. You can cut and arrange everything ahead of time, although you might want to brush the apples with a little bit of lemon juice to make sure they don't brown and get dried out.

In a large skillet, heat oil over medium heat. Add leeks and water, and season with salt and pepper. Cook, stirring occasionally, until the leeks begin to brown, about 10 minutes. Add sherry and sage, and cook until liquid is reduced to a glaze, about 3 minutes. Set aside.

In a large, shallow baking dish, arrange squash and apple slices in alternating rows, as in the picture above. Add leek glaze between the layers. Cover tightly with aluminum foil, and bake for 45 minutes.

Remove the pan from the oven, and raise the oven temperature to 450°. Uncover the pan and sprinkled the top with cheese. Bake uncovered for about 10 minutes, or until the cheese has melted and begun to brown. Cool slightly before serving.
Posted by Pam at 11:02 PM

This looks and sounds outstanding! I can just imagine how wonderful this smelled while it bubbled away in the oven.

Oh, yum! Apples and butternut squash are two of my favorite things! THrow in some sage and cheddar cheese and I'm sold!

I am making this for thanksgiviing and I like your choice of cheddar rather then parmesan that is in Marthas recipe and your layering sure looks nicer then hers!