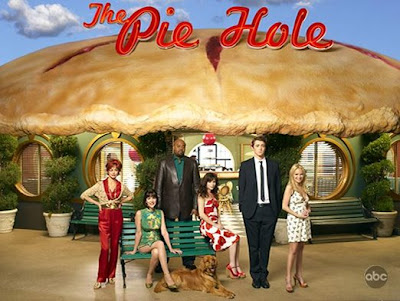 Apparently this week is all about food and television for me. Tonight, Pushing Daisies has its season premiere, and what better food to have to celebrate with than cup pies! Pushing Daisies has such a unique style that it's hard not to love it - quirky storylines, a fairytale-like narrator, bright sets, good writing, a love triangle... and PIE! Ned the pie maker can bring the dead back to life, whether it's fruit past its prime or his childhood crush, Chuck.

So, I've been wanting to make these cup pies since Chuck suggested them to Ned, and I've been curious about cheese baked into the crust as well (which Chuck does for her depressed, cheese-loving aunts), so why not combine them? This dough is fantastic and easy to put make and use, so this may be my default pie dough from now on. I even enjoyed the leftover scraps (coated in egg wash and sugar), and now I want to make cookies out of it. And the cup pie shape has a much better dough-to-filling ratio, at least for my tastes. I can't wait to try it with other fillings. 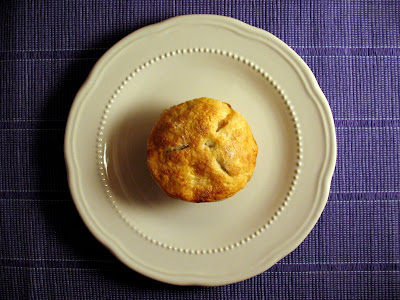 In a large bowl, combine flour, sugar, salt, and butter. Using the tips of your fingers, blend the butter into the flour until pea-size clumps begin to form. Add cheese and mix in. Add water and knead until the dough just pulls together (add a little extra water if there is a lot of extra flour in the bowl). Divide dough in half and pat each half into flattened disks. Wrap in plastic wrap and store in the fridge for at least an hour, or up to 2 days.

In a medium bowl, combine chopped apples, sugar, cinnamon, nutmeg, and flour. Mix to ensure that the apples are fully covered in the mixture.

Using a 12-cup cupcake pan, grease alternating cups (so that any overflow or overhang from the cup pies does not get in the way of other cup pies) - the outside cups in one row, the inner cup in the next row, etc.

On a floured surface, roll out one of the dough disks until it is about 1/4-inch thick. Using a large cup or biscuit cutter (about 4 1/2 inch), cut 6 circles and fit into the greased cups. Make sure to push them in so they fit into the bottoms and sides of the cups. Fill each pie with apple mixture, heaped up over the top of the pan. Roll out the second half of the dough and use a smaller cup or biscuit cutter (about 3 1/2 inch) to cut 6 circles. Top each pie with the smaller circles and press the edges together to seal. Brush the top of each pie with beaten egg and dust with sugar, then cut some small steam holes in the tops.

Bake for 15 minutes at 425°, then reduce the heat to 350° and bake an another 15 minutes, until the dough is golden and the filling begins to bubble out (in fact, if your cupcake pan doesn't have edges, you may want to set a sheet pan underneath to catch any drippings).

Serve warm with ice cream, or at room temperature any time (especially handy for adding to a lunch).
Posted by Pam at 8:29 AM

Yay for Pushing Daisies being back again! And making cup pies is definitly on my to-do list!

Love the idea of personal little pies! I just made some pork pies in muffin tins last week - I'm ready to try some sweet ones!

OMG, these look so cute!!! And I love Pushing Daisies! Here in Holland the first season started a few weeks ago and last week I saw the episode where Chuck thinks of the cup pies. I will absolutely be trying these. Would you mind if I post them on my blog (with a link to your post ofcourse)?

Brilynn, cup pies are a must-try for anyone, I think!

Hi Marthe,
Yes, feel free to repost. I cobbled this recipe together from a bunch of different sources.

These pies seems great! I love Pushing Daisies, and when I heard ABC might cancel it, I almost cried. Now, I think I'm going to make these pies and send them to ABC so they will get the message to keep Pushing Daisies!