Eat Drink and Be Fair Cook-Off 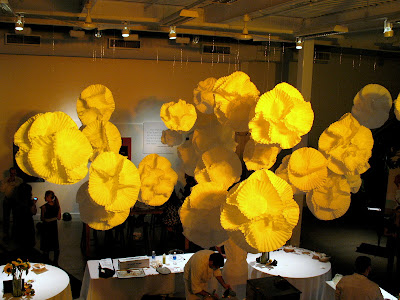 Last night was part two of Green Mountain Coffee's celebration of Fair Trade Month with their Eat Drink and Be Fair event. Instead of a sit down dinner like last week, this was billed as a "Top Chef Masters"-style cook off between some amazing chefs. Besides one dish from each competitor, there were also a range of appetizers focused on Fair Trade and local ingredients. And since Green Mountain was the host, there were a lot of other great companies from Vermont showing off their wares - Cabot Creamery, Long Trail Brewery, Ben & Jerry's - it was like going back to Vermont for an evening. My favorite appetizer was simple, and it's something that I think I'll be making at home - local apples and brie in puff pastry bites.

Since I've been telling people about these events, I've had questions about what Fair Trade is. Prior to these dinners, I had the vaguest sense of a definition, but I have a much firmer grasp on the term now. Basically, Fair Trade provides a fair price to farmers for their harvest. Prices can fluctuate wildly, so this makes sure they get a minimum price for their goods. It also creates networks for farmers, meaning they can work together to strengthen their communities (through schools, roads, etc). Fair Trade also allows companies like Green Mountain to get products out of difficult-to-reach regions and cutting out the middleman. Fair Trade can apply to a huge variety of products, including coffee, chocolate, vanilla, fruits like bananas, and even products like cotton. You can learn more about Fair Trade here.

As part of the event, Green Mountain flew some of the coffee producers from Guatamala up to New England to tour the facilities in Vermont and to join us at this dinner. Domingo, the president of their farmers association, spoke for a bit through a translator. One of the farmers had a video camera glued to his hand all night, taking in every bit of the event, and he had the biggest smile on his face the whole time. 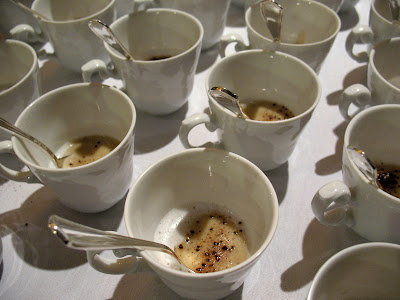 OK, onto the food. I've been thinking about this sea urchin cappuccino from Chef Richard Garcia of Tastings Wine Bar & Bistro since I had it last week. This week's iteration was a little different, but probably because they were making a much bigger batch. The coffee, used in place of broth, was a stronger component. I like the idea of using coffee in this way, and it works especially well with the creamy and slightly sweet parsnips. During the Top Chef portion of the evening, Chef Garcia showed off by opening a bunch of sea urchins at such a fast pace that I couldn't even get a photo of him in action. This dish was also the most unique, I think, because it varied from the others, which were all protein over puree, and used the Fair Trade ingredients (coffee and vanilla) in the most unusual way. 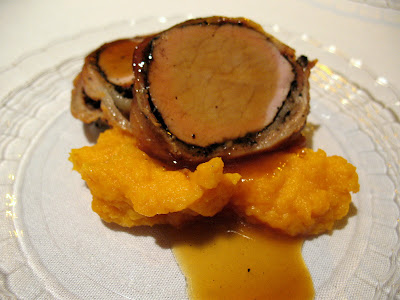 Next up was a bacon and coffee crusted pork tenderloin with sweet potato puree, presented by Chef Jay Silva of Bambara. My friend thought the coffee in the crust (the black ring in the photo above) was too strong, but I really liked it. The pork was perfectly tender, thanks to the bacon, and the sweet potato was a fitting pairing, making the whole dish taste like fall. 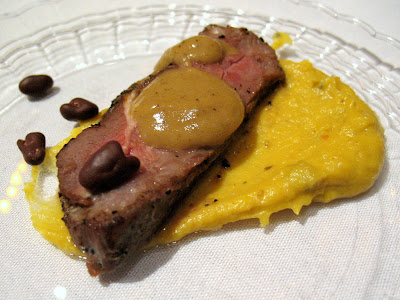 Then we headed for the tea-smoked beef sirloin with banana squash puree and a coffee and sunchoke gravy, presented by Chef Will Gilson of Garden at the Cellar. This was probably my least favorite of the dishes, but only because the piece of meat I got was pretty grisly and hard to chew. The flavors were all really good, though, and I loved the use of cacao nibs as garnish. I still haven't been to Garden at the Cellar, and now I'm looking forward to it even more (if only because I want to see what Chef Gilson can do with a dish that I can actually chew). ;) 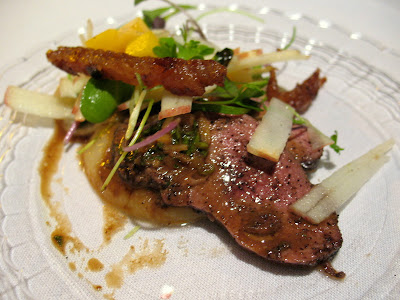 The last dish was coffee-marinated duck breast with parsnip puree, pickled pumpkin, gala apple, and an espresso-vanilla chimichurri, presented by Chef Peter McCarthy of EVOO and Za. This was pronounced the winner by the judges, and for good reason. The duck was cooked very well (appparently I like duck now, because this is the second time I've had it in a week and I loved both dishes), but the best part was the pickled pumpkin. I don't know how it's done, but it's something I want to make at home now!

After dinner, I grabbed a cup of coffee (Rainforest nut, which I haven't had for ages, and I loved it all over again) and enjoyed the balmy weather by sitting in the courtyard (can you believe it was snowing just a few days ago?!).

Oh, and did I mention Ben & Jerry's was there? They have a variety of Fair Trade flavors, but my favorite was the Chocolate Macadamia (Fair Trade vanilla and chocolate ice cream with fudge-covered sustainable-sourced macadamia nuts). Soooo good!
Posted by Pam at 10:53 PM

Great summary! I was there too, and I had read your previous post about the sea urchin, so it was kind of cool to see it again. I think that was one of my favorite dishes.

I caught a quick photo of Chef Garcia cutting the sea urchins but it was pretty blurry! My husband won the cooking lessons though, so hopefully I can tag along and ask Chef Garcia more questions. :)

Awww I totally wish I could have gone to this... The food looks so amazing! And since I'm a major coffee fan (esp. Green Mountain), I'm sure I would have loved it all!

Hi Pam,
It was great meeting you at blogtoberfest!