When I first heard that Absolut was unveiling a new flavor "based" on Boston, all I could think of was the creative Absolut ads that people used to collect when I was in high school, including this one titled Absolut Boston. From that ad, it was clear that Boston=tea in many people's minds, and that idea has continued with this new black tea elderflower flavor. The whole concept of city-based flavors (Boston is the third, after New Orleans and Los Angeles) still seems a little odd to me, but who am I to argue when it tastes great? 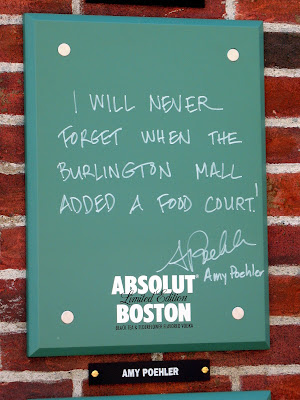 To celebrate the launch of this new flavor, Absolut asked some famous Bostonians for their favorite Boston moments, and they have displayed them all on a Wall of Pride in front of the Prudential Center. Amy Poehler's (above) made me laugh out loud, because I've spent way too much time at the Burlington Mall (by the way, the Burlington Mall is one of only two MA locations of Chick-Fil-A - yum!). The wall will be up on Boylston Street until September 4th, after which the tiles will be auctioned off (with the money raised going to the Charles River Conservancy). You can see all the tiles up close on the auction page. Absolut and Horizon Beverages (MA distributor of Absolut) are also donating proceeds to the Charles River Conservancy. 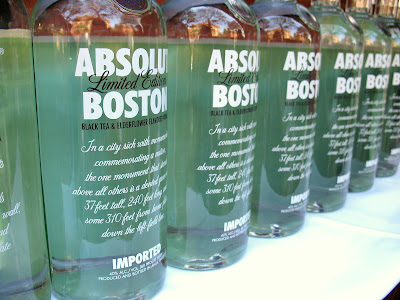 After the unveiling of the wall, we headed to Stephanie's on Newbury to actually try the new vodka. They mixed up three different cocktails, and I was surprised at how versatile the black tea and elderflower flavors were. My favorite drink was the Boston Tea Party, which tasted primarily of black tea. I also enjoyed the Homerun, which tasted much more strongly of elderflower. The third choice, a mojito, just tasted like a mojito. There are 14 different cocktail recipes available on the Absolut Boston Facebook page, but my favorite, the Boston Tea Party, is below. 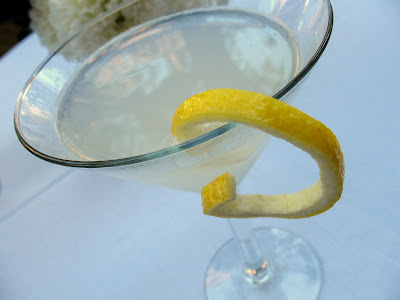 Shake Absolut Boston, lemon juice, and simple syrup over ice and strain into a martini glass. Garnish with a lemon twist.
Posted by Pam at 11:18 PM

hmmm I'll have to give this a try.
I had the NOLA one and it was kinda gross... mango and black pepper was kinda iffy. Too weird to add to bloody marys and too peppery to add ao another juice. Hopefully this will repressent Boston properly!

I walked right by there as it was going on and wondered what was up! i love the ads, so i'll have to keep a eye out for this in stores, do you know of any store that has it?

Yeah, mango and black pepper sound a little weird, but thankfully, this one tastes good! Much more mixable, too.

Shannon, I've seen it in every liquor store I've been in the past week (which is only 2, I'm not that much of a lush!). I'm pretty sure that any place with a decent selection that carries Absolut (so, most places?) will have it.

I tried a twist on the tea party, using grenadine (homemade, of course) instead of the simple syrup. Pretty tasty. I am calling it the Redcoat.

Bradley, that sounds really good! My friends and I have been mixing it with cranberry juice and calling it a Boston Massacre.