I was on a plane years ago when the lady I was sitting next to asked me where I was from. "Boston," I said. I certainly wasn't expecting her response - "Oh, I love Texas!" I was a little too shocked to tell her that I wasn't talking about Austin. That was probably my first realization that I do have something of a Boston accent (although not in comparison to many people in the area).

I finally got the chance to visit Austin, though, last week, when I was in town for the Society of American Archivists' annual meeting. Luckily, my grad school classmate Melissa, who went to the University of Texas for college, was my guide, and she took me to all her favorite places. 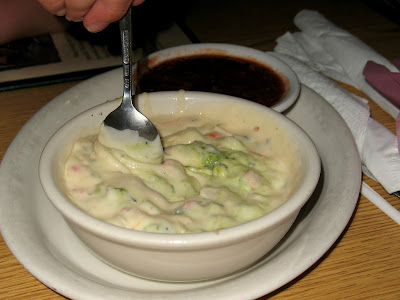 One of our first stops was Kerbey Lane, a 24-hour cafe with a creative menu. Their queso is probably the best I've ever had - a subtle cheesiness mixed with guacamole and pico de gallo. Three of us couldn't get to the bottom of the bowl, although I was trying my hardest. I could have gone back there at any other point during the trip just for more of this stuff. I ended up stuffing myself further with their gingerbread pancakes, and I had a hard time deciding between the pancakes and the seasonal zucchini bread French toast. 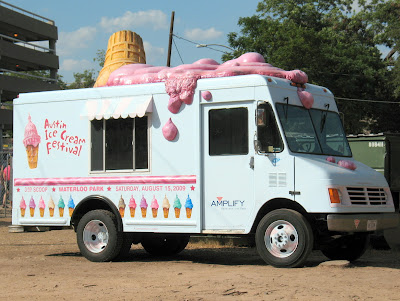 The conference was over by Saturday afternoon, and I was really excited to be able to go to the 3rd Annual Austin Ice Cream Festival. I was greatly disappointed by the event though - I was expecting something more like the Scooperbowl, where you pay your entrance fee and then get to try samples from a variety of different ice cream companies. Instead, each company had their ice cream truck selling scoops (although some were selling sample sizes for $1). This made it hard to try lots of different flavors and purveyors. 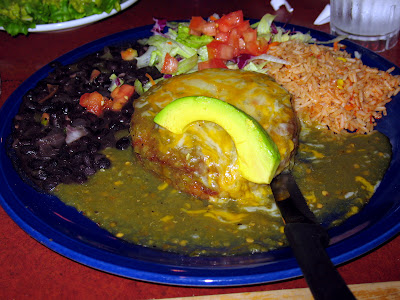 An afternoon of ice cream did not stop us from eating more a few hours later. We hit Trudy's for dinner, another of Melissa's favorite restaurants. I stared at the menu for ages, but finally settled on the stuffed avocado, a whole avocado filled with chicken and cheese, then deep-fried and smothered in sauce. I mean, how can you go wrong with avocado and deep-fried?! 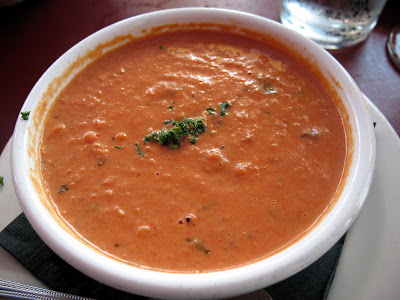 Sunday, my last full day in town, was filled with more eating. We had brunch at Romeo's. Although it was hotter out than I had been used to (from Boston's weird, cool early summer), the tomato soup was recommended. It is smooth and thick and creamy, with just enough salt to really bring out the sweetness of the tomatoes. I also had a BLT pizza, topped with big pieces of bacon, tomato, smoked mozzarella, and a hearty sprinkling of chopped lettuce, all on a thin and crispy crust. 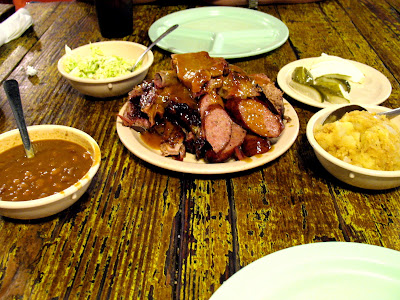 For dinner, we made the pilgrimage out to the town of Driftwood to eat at the Salt Lick. Friends have been telling me about this place for years, and it really did deserve the hype. We got the family-style meal, which includes unlimited brisket, sausage, ribs, cole slaw, potato salad, beans, pickles, and bread. The meat was amazing - I'm not usually a fan of sausage, but I loved the seasoning and the snap of the casing. The ribs were so tender that they were almost impossible to eat by picking them up - the meat just fell right off. I even enjoyed the cole slaw and the potato salad because they weren't the traditional kind, loaded with mayo, but were vinegary. We saved just enough room for the peach cobbler - I definitely needed something a little sweet at the end of the that huge meal.

Of course, that wasn't all we hit. We also visited Hut's Hamburgers (amazing onion rings), Walton's Fancy and Staple (a beautiful bakery with delicious pastries), Epoch Coffee (if I lived in Austin, I would hang out here all the time), Mekong River (delicious Vietnamese), The Jackalope (Ace Pear Cider is my new favorite cider, although I don't think you can get it in MA...), Cornucopia (40+ flavors of popcorn? Uh, yes!), and Whataburger (the honey chicken biscuit makes an amazing breakfast).

Overall, my trip was great (although exhausting), and I really enjoyed the city. I wouldn't mind going back (maybe during a cooler time of year) to see more of the area.
Posted by Pam at 11:08 AM

A deep-fried avocado? That sounds intense. :)

I would love to go to Austin! It looks like they have such amazing soups!