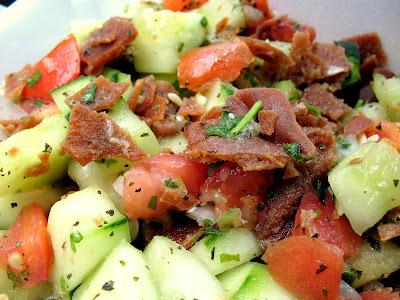 Moody's Falafel Palace may not look like much - cramped quarters with little sitting room in a building that looks like a shack - but the food more than makes up for the lack of ambiance. Whether you're looking for a fresh lunch or a late night meal to sop up all that excess booze, Moody's will deliver your food cheap.

As the name suggests, Moody's specializes in Middle Eastern fare. Roll-ups cost between $3.99 and $4.99 and are the perfect meal to eat on the go. This Bostonist favors the lamb shawarma (below), filled with lettuce, onion, tomato, pickles, tahini sauce, and crispy and juicy shavings of meat. Plates, heaping meals that are sure to fill you up, cost between $5.75 and $8.99. 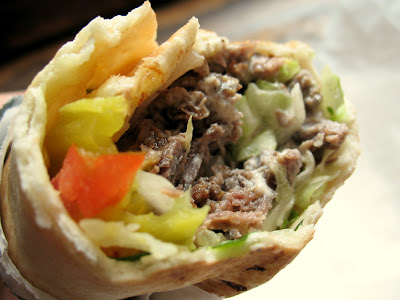 On a hot summer day, though, there's almost nothing better than a salad that is both refreshing and filling (often a tall order). Bostonist recommends the Mazza salad (top). It's a heavenly mixture of freshly-fried pita chips, crunchy cucumbers, soft tomatoes, and plenty of flavor, thanks to a boatload of herbs and a lemony dressing. The serving is huge, and for only $4.75, is an excellent value.

Moody's Falafel Palace is located at 25 Central Square, about half a block down Western Ave from Mass Ave. They are open daily from 11am to midnight and extend their hours until 3am on Friday and Saturday. There's a minimum credit charge of $15, so make sure to bring some cash (unless, of course, you want to pay for everyone in there). And because there are only a few people working there, it may take some time to get your food - you can always order a slice of baklava to tide you over!

Awesome falafel wraps there! I hike over from Kendall Square with coworkers to pick up lunch sometimes.

My bf lives around the corner so I'm here wayyy too much! It's good falafel, but if I had to choose I'm obsessed with Rami's in Coolidge Corner! Moody's does have awesome lamb schwarama too!

I've never been into falafels but I have heard such great things about that place - I'll have to try it!

I liked everything I tried here, but after tasting this salad, I can't see myself ordering anything else.

Susan, definitely give it a shot!

I love this place - the falafels are awesome.