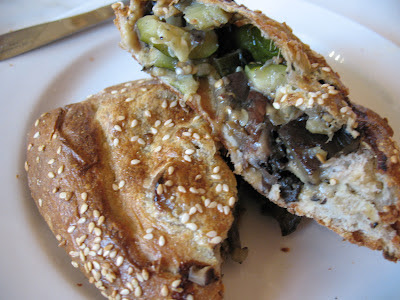 Pie Bakery & Cafe is located in Newton Center, between my apartment and my friends' house. I drive by it all the time, but it's usually closed whenever I'm nearby. I love how simple the name is (can't beat the Pie Hole, though), and you know what you're getting when you go in there. There's even a giant pie mural on the wall, so it's hard not to figure out what they sell.

Surprisingly, I didn't order pie on my first visit. Well, not a typically piece of pie. Instead, I opted for a hand pie and a "pie" cupcake.

The roasted veggie handpie was very tasty, although a little unappealing looking. The vegetables (mostly zucchini and eggplant) were a dull brown inside the glossy wheat dough wrapper. However, the flavor of the dough and the light lemony sauce inside more than made up for the looks. 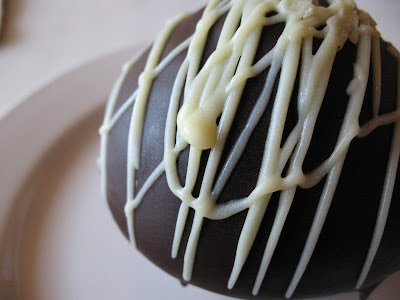 It felt almost blasphemous not ordering a slice of pie for dessert, but the Boston Cream Pie cupcake looked too good. It was mostly all looks, though. The cupcake was too dense, and the chocolate coating on top was very hard. The cream, however, was fantastic, with little vanilla bean flecks throughout. I could have just eaten a bowl of the cream instead. And while it was tasty, it wasn't great, and I would definitely try the real pie next time.

goodness, those photos are mouth-watering

just had a slice of Pie's chocolate cream pie last night. yummy! inspired me to make a rhubarb galette this afternoon. can't wait to check out Pie in person.

Hi there! Surfed on from chowhound. I've had a few of their savory pies. They're pretty good. I especially like the crusts though it usually takes about 15 minutes for them to warm the pie in the oven which can be detering.

Yeah, 15 minutes can be a long time for something that should be so quick and easy.

I just tried their lemon merengue and their key lime pies... the merengue wasn't weepy at all, and the lemon was nice and sweet. The lime was a little more tart, but I really liked the graham cracker crust.

If you all love pie, my neighbor makes FANTASTIC pies and she delivers them to people all over the Boston area. Her Caramel Apple and Cherry Almond pies are fantastic. Her name is Care and she has a website... I believe it is caresbakery.com

oh, and her Pecan Turtle candies are TO DIE FOR