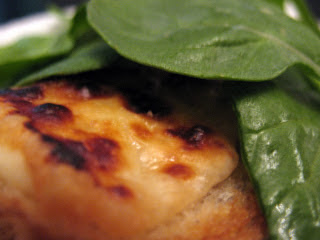 When I studied abroad in Italy, I lived in the small town of Vescovado di Murlo, outside of Siena. On Saturdays, we would usually take the bus into Siena for shopping or to take the train to visit other cities. On Sundays, though, there was no bus, so we were stuck in town. More often than not, we would leave our dusty little hamlet and walk the mile or so to Murlo proper, a medieval castle set up on a hill.

Food offerings in the castle were a little more gourmet than in town. There was a pizzeria, with delicious crisp crusts and an amazing view of the valley. There was also a small enoteca, which served some great food along with their wine selections. The enoteca actually roasted a whole pig for our end-of-the-season fete, and you better believe that 50 hungry Americans who had had almost no meat all summer gobbled it up in no time. 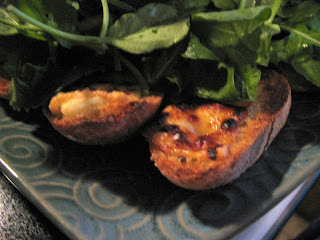 On our first trip to the enoteca, they told us what they had for the day and we said that was fine. First out was a plate of crostini, smothered in pecorino cheese and honey. I had never had pecorino before, and this was a revelation. The cheese was salty and nutty, balanced out beautifully by the sweet honey. I honestly can't remember what else we ate that night because that crostini was so fabulous.

Later that summer, my friend Suzy and I tried to recreate the crostini, but our kitchen was woefully ill-equiped (we were living in what had previously been an old age home). Our attempt turned out soggy and gross.

Back in the States, I tried my hand at the crostini again, this time with better results. Somehow, I added arugula as a topping, and the dish took on new levels of wonderment.

I don't make this often, because I know I'll just end up eating all of it. This batch was made for a barbeque at my friend Ann's house... she calls the dish "Pam's Cheese Thing" which actually makes it sound kind of disgusting.

Every time I eat this now, it brings me back to those long summer days, digging in the hot sun, exploring places I would never have seen otherwise, and drinking heavily (and legally!) before my 21st birthday. 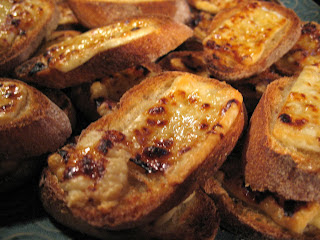 Arrange baguette slices on a baking sheet. Drizzle each slice with honey lightly, 3 or 4 squiggles with the bottle with do. Top with 1/8 inch slices of cheese. Drizzle again with honey, 3 or 4 squiggles. Let rest for about 30 minutes to allow the honey to cover the cheese entirely. Broil for 2-3 minutes, until cheese turns golden brown. Do not over-broil or the bread and cheese will burn. Arrange on a platter and top with arugula.
Posted by Pam at 5:04 PM

I think i just started salivating at my desk...