There are worse ways to spend a Saturday than wandering around Boston's North End, tasting authentic Italian food. This past weekend, a small group of bloggers (myself included) were shown the wonders of the North End by Bertolli (yep, the olive oil and pasta sauce people). Just because we're not in Italy doesn't mean we can't eat like we're in Italy, and Bertolli is focused on bringing quality ingredients and products to everyone. One thing they wanted to highlight with this tour was the ways in which pasta and sauce or one of the Bertolli frozen dinners could be supplemented by antipasti, fresh ingredients, wine, or dessert to make it that much closer to a real meal in Italy. 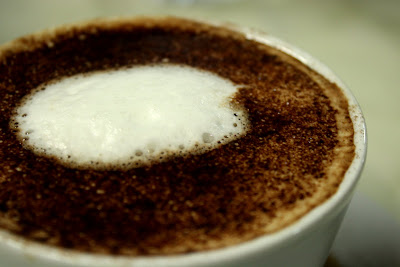 Our first stop was Caffe Vittoria on Hanover Street. We sat in the back of the restaurant, sipping on cappuccino and nibbling on assorted pastries while we waited for everyone to arrive. The cafe is a great spot to grab a leisurely snack (much more leisurely than Mike's Pastry next door) and talk with friends. I used the time to compare notes about curly hair with Janel (we both drive all the way to Beverly to go to a great salon for curly girls) and to meet some great new people.

When Caffe Vittoria's manager came out to speak to us, he told us about the workings of the oldest Italian cafe in the city. We were all especially impressed with the fact that Caffe Vittoria sells up to 700 cannolis a day! When asked what his favorite thing on the menu was, our host mentioned the gelato (pistachio especially) and had a few bowls sent up so we could try it. Vittoria's gelato is smooth and rich - the coffee was my favorite of the bunch. 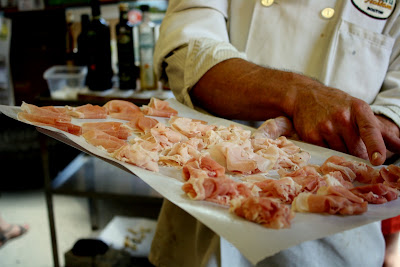 Our next stop was Salumeria Italiana on Richmond Street (but just steps off Hanover). Even though this shop is so close to the main drag, I think it often gets overlooked (a number of people in our group had never heard of it before). The tiny shop is packed with ingredients shipped in from Italy, including meats, cheeses, oil and vinegar, spices, and packaged food. There is a huge display of fresh breads in the front window, as well.

We were greeted by the staff and then started in on a tasting of meats, cheeses, and olive oils with chef Raymond Gillespie, who is in the shop most days to help customers put together authentic meals. The meats (above, left to right)were speck (a smoked prosciutto), porchetta (roasted pork with a mild flavor), and prosciutto di Parma (which literally melted in my mouth). From there, we moved on to cheeses (bottom to top in this picture) - carozzi capriziola (a creamy blue that was quite mild - I generally dislike blue, but this was quite tasty), piave vecchio (an aged cheese with lots of character and something that most people would enjoy), and seemingly everyone's favorite, moliterno al tartufo (an aged sheep's milk cheese infused with black truffles). Having those meats and cheeses on a platter would be a quick and easy way to dress up a meal, and Salumeria Italiana has plenty of olives and salads to go alongside them. 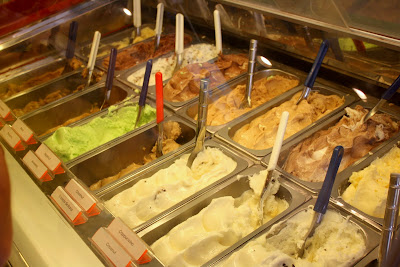 And then it was time for our second (officially, only the first) gelato of the day. We headed back to Hanover Street to Gigi Gelateria, which has both a street-side counter and a more expansive counter inside. I have had gelato from Gigi's many, many times (why is it that the only time I wander around the North End is when it's a million degrees? At least gelato helps cool you off), enough times to already have a favorite flavor. I could rhapsodize about the grapefruit sorbetto all day, so I decided to try something else to get a wider grasp of their flavors. Made in small batches, Gigi's gelato is flavorful and satisfying (and you don't need to eat a whole lot to be happy). Gelato uses milk and has less air churned into it, while ice cream uses cream and eggs (plus all that churning time), so you can ever feel slightly more healthy with gelato.

I opted for the caramel and the tiramisu, and both tasted just like their names. But I had gotten the grapefruit sorbet in my head, and these two didn't stand up against the sorbet. I tasted a few other sorbets as well, and I can safely say they're all amazing. Gigi's has great gelato, but even better sorbet.

We had a little time to kill, and we started talking about our favorite things to do in the North End. I said "This may sound crazy, but I love going to the True Value hardware store, which has one of the best selections of kitchen wares in the area." I'm sure no one there was expecting that answer (and I'm sure my father will now use this as an excuse to drag me to Home Depot with him). And since we had some time to kill, I hijacked the tour and led us over to the hardware store (which is filled with things like fancy glass jars from Italy and ravioli stamps and pizelle irons, all of which I covet). Seriously, check out this hardware store on Salem Street the next time you're in the North End; there is some awesome stuff to be had there. 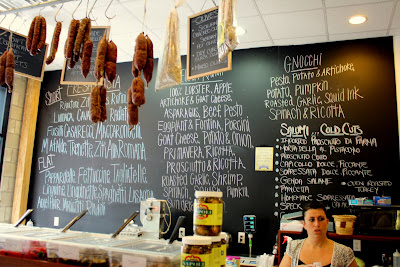 We moved onto the next stop in the tour, DePasquale's Homemade Pasta on Cross Street, right across from the Greenway. This shop makes tons of fresh pasta for customers as well as a few of the restaurants in the North End. They have more shapes, sizes, and flavors (lobster, squid ink, mushroom) than I knew existed, and they have tons of traditional and not-so-traditional (marshmallow and chocolate, anyone?) ravioli to choose from. I asked the manager what his favorite was, and he pointed out the radiatori, because its unique shape allows the sauce to cling to it. We were also told that a good way to choose a pasta is to start backwards and think about the kind of sauce you want. The sauce will often dictate the flavors needed in the pasta, so you can create a more unified meal by working backwards. The staff at DePasquale's was wonderful and filled with ideas on how to prepare each and every kind of pasta in the shop. 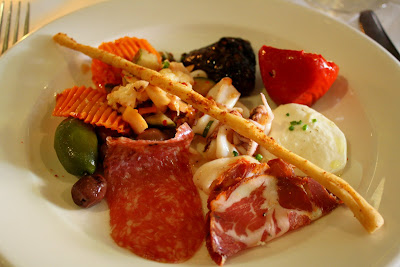 For our last stop, we headed to Lucca for dinner. Bertolli was started in the town of Lucca in Italy, so it seemed like a fitting spot to celebrate everything we had learned throughout the day. As we talked, we enjoyed this wonderful antipasto plate, filled with meats, cheeses, calamari, olives, and pickled vegetables.

Although pasta is not considered a main dish in Italy, we were all pretty full, so a sampling of two different pasta dishes was more than enough. The pasta duo consisted of tagliatelle with lobster, chanterelle mushrooms, corn, scallions, and crispy bacon in a cream sauce and ravioli stuffed with goat cheese and caramelized onion, served with fava beans, escarole, cherry tomatoes, and basil. The two dishes were so diverse that I felt like I could go back and forth between them and not get tired of the flavors. The ravioli were sweet and fresh-tasting, while the tagliatelle was luxurious (and you didn't even need the lobster on there for it to be delicious).

We were all well and stuffed by then, having eaten for a good part of the last 5 hours. We ordered a few of Lucca's desserts to pass around the table, including the chocolate flourless cake, the panna cotta, the tiramisu, and my favorite, the almond basil cake. There were lots of tastes of grappa around the table, but I opted for some espresso (I was joining my friends for Harry Potter later that evening). 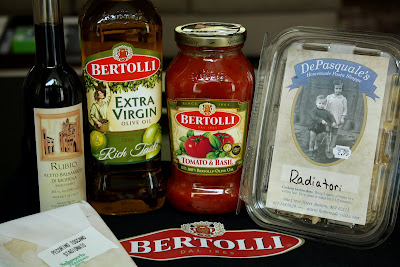 I waddled back to my car, filled with wonderful food and good ideas and toting a bag filled with goodies we received at each stop along the way. I now have all the ingredients needed to make an authentically Italian meal at home - Lavazza coffee (thanks to Caffe Vittoria), Rubio balsamic vinegar (thick and unlike any vinegar from the supermarket) and pecorino cheese (thanks to Salumeria Italiana), some of that fine radiatori (thanks to DePasquale's Pasta), and of course, some olive oil and tomato sauce from our hosts, Bertolli. I can happily say that I have tried some of all of these already (with a post to come), and if I sit amongst my tomato and basil plants while I eat, I can really feel like I'm enjoying a meal in Italy.

Full Disclosure note: This tour and samples were provided to me for free from Bertolli. But I wouldn't write about it if I didn't like it!
Posted by Pam at 8:28 AM

Such a fabulous day, and so nice seeing you! I would do anything for some Vittoria gelato right now

How did I miss the curly hair conversation?!

Had a great time wandering around the North End with you... and thanks for telling us all about the hardware store! Great detour!

this looks like so much fun. i LOVE that true value!! it has been a lifesaver.